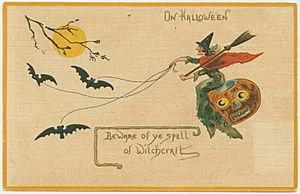 Halloween is a celebration on the night of October 31st. It is practiced in various countries in the world but has become very popular in the United States and Canada.

October 31, is the eve of the Western Christian feast of All Hallows. All Hallows' Eve is a Christianized feast influenced by Celtic harvest festivals, and pagan roots.

The pagan holiday Samhain, which the All Saints holy day replaced, was also known as the Day of the Dead. Many wiccans and modern pagans celebrate the Day of the Dead. This is a happy holiday (even though it celebrates death). It is the day that some believed the souls of dead people come back to Earth.

People took steps to ward-off these harmful spirits/fairies, which is thought to have influenced today's Halloween customs.

Before the 20th century, wearing costumes at Samhain was done in parts of Ireland, Mann, the Scottish Highlands and islands, and Wales. Wearing costumes may have originated as a means of disguising oneself from these harmful spirits/fairies.

In Ireland, people went about before nightfall collecting for Samhain feasts and sometimes wore costumes while doing so. In the 19th century on Ireland's southern coast, a man dressed as a white mare would lead youths door-to-door collecting food; by giving them food, the household could expect good fortune from the 'Muck Olla'.

In Moray during the 18th century, boys called at each house in their village asking for fuel for the Samhain bonfire. The modern custom of trick-or-treating may have come from these practices. 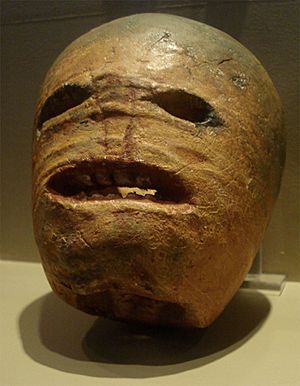 A traditional Irish Halloween turnip (rutabaga) lantern on display in the Museum of Country Life, Ireland

Making jack-o'-lanterns at Halloween may also have sprung from Samhain and Celtic beliefs. Turnip lanterns, sometimes with faces carved into them, were made on Samhain in the 19th century in parts of Ireland and the Scottish Highlands. As well as being used to light one's way while outside on Samhain night, they may also have been used to represent the spirits/fairies and/or to protect oneself and one's home from them. However, a Christian origin has also been proposed.

Halloween is also thought to have been influenced by the Christian holy days of All Saints' Day (also known as All Hallows, Hallowmas or Hallowtide) on November 1 and All Souls' Day on November 2. They were a time for honoring the saints and praying for the recently departed who had yet to reach Heaven. All Saints was introduced in the year 609, but was originally celebrated on May 13. In 835, it was switched to November 1 (the same date as Samhain) at the behest of Pope Gregory IV. Some have suggested this was due to Celtic influence, while others suggest it was a Germanic idea. 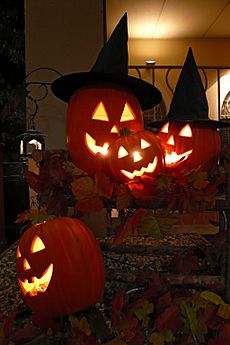 Development of artifacts and symbols associated with Halloween formed over time.

The turnip has traditionally been used in Ireland and Scotland at Halloween, but immigrants to North America used the native pumpkin, which is both much softer and much larger – making it easier to carve than a turnip. Subsequently, the mass marketing of various size pumpkins in autumn, in both the corporate and local markets, has made pumpkins universally available for this purpose. The American tradition of carving pumpkins is recorded in 1837 and was originally associated with harvest time in general, not becoming specifically associated with Halloween until the mid-to-late 19th century.

The modern imagery of Halloween comes from many sources, including national customs, works of Gothic and horror literature (such as the novels Frankenstein and Dracula) and classic horror films (such as Frankenstein and The Mummy).

Elements of the autumn season, such as pumpkins, corn husks and scarecrows, are also prevalent. Homes are often decorated with these types of symbols around Halloween. 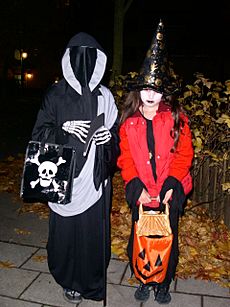 Trick-or-treating is a customary celebration for children on Halloween. Children go in costume from house to house, asking for treats such as candy (sweets) or sometimes money, with the question, "Trick or treat?" The word "trick" refers to a (mostly idle) "threat" to perform mischief on the homeowners or their property if no treat is given.

In Scotland and Ireland, guising – children disguised in costume going from door to door for food or coins  – is a traditional Halloween custom, and is recorded in Scotland at Halloween in 1895 where masqueraders in disguise carrying lanterns made out of scooped out turnips, visit homes to be rewarded with cakes, fruit and money. The practice of Guising at Halloween in North America is first recorded in 1911, where a newspaper in Kingston, Ontario reported children going "guising" around the neighborhood. 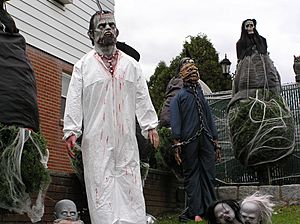 Halloween in Yonkers, New York, US

The thousands of Halloween postcards produced between the turn of the 20th century and the 1920s commonly show children but not trick-or-treating.

Trick-or-treating does not seem to have become a widespread practice until the 1930s, with the first U.S. appearances of the term in 1934, and the first use in a national publication occurring in 1939. 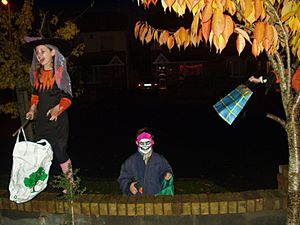 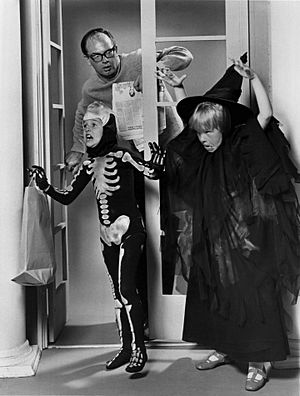 Halloween costumes are traditionally modeled after supernatural figures such as monsters, ghosts, skeletons, witches, and devils. Over time, the costume selection extended to include popular characters from fiction, celebrities, and generic archetypes such as ninjas and princesses.

Dressing up in costumes and going "guising" was prevalent in Ireland and Scotland at Halloween by the late 19th century. Costuming became popular for Halloween parties in the US in the early 20th century, as often for adults as for children. The first mass-produced Halloween costumes appeared in stores in the 1930s when trick-or-treating was becoming popular in the United States.

Halloween costume parties generally fall on or around October 31, often on the Friday or Saturday before Halloween. 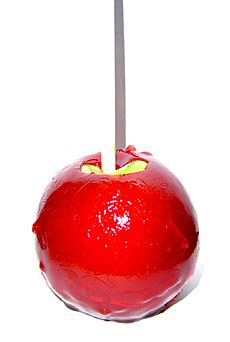 Because Halloween comes in the wake of the yearly apple harvest, candy apples (known as toffee apples outside North America), caramel or taffy apples are common Halloween treats made by rolling whole apples in a sticky sugar syrup, sometimes followed by rolling them in nuts.

At one time, candy apples were commonly given to children, but the practice rapidly waned in the wake of widespread rumors that some individuals were embedding items like pins and razor blades in the apples in the United States. While there is evidence of such incidents, they are quite rare and have never resulted in serious injury. Nonetheless, many parents assumed that such heinous practices were rampant because of the mass media. At the peak of the hysteria, some hospitals offered free X-rays of children's Halloween hauls in order to find evidence of tampering. Virtually all of the few known candy poisoning incidents involved parents who poisoned their own children's candy.

One custom that persists in modern-day Ireland is the baking (or more often nowadays, the purchase) of a barmbrack (Irish: báirín breac), which is a light fruitcake, into which a plain ring, a coin and other charms are placed before baking. It is said that those who get a ring will find their true love in the ensuing year. This is similar to the tradition of king cake at the festival of Epiphany.

All content from Kiddle encyclopedia articles (including the article images and facts) can be freely used under Attribution-ShareAlike license, unless stated otherwise. Cite this article:
Halloween Facts for Kids. Kiddle Encyclopedia.