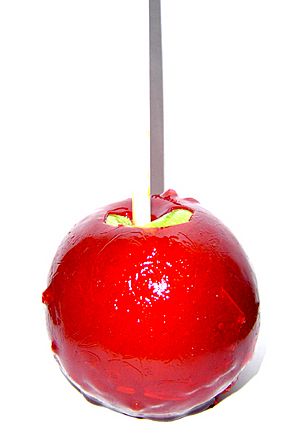 Toffee apples, also known as candy apples in North America, are whole apples covered in a hard toffee or sugar candy coating, with a stick inserted as a handle. These are a common treat at autumn festivals in Western culture in the Northern Hemisphere, such as Halloween and Guy Fawkes Night because these festivals fall in the wake of the annual apple harvest. Although candy apples and caramel apples may seem similar, they are made using distinctly different processes.

According to one source, American William W. Kolb invented the red candy apple.

Kolb, a veteran Newark candy-maker, produced his first batch of candied apples in 1908. While experimenting in his candy shop with red cinnamon candy for the Christmas trade, he dipped some apples into the mixture and put them in the windows for display. He sold the whole first batch for 5 cents each and later sold thousands yearly. Soon candied apples were being sold along the Jersey Shore, at the circus and in candy shops across the country, according to the Newark News in 1948.

Candy apples are made by coating an apple with a layer of sugar that has been heated to hard crack stage (depending upon the type of sugar). The most common sugar coating is made from sugar (white or brown), corn syrup, water, cinnamon and red food coloring. Humid weather can prevent the sugar from hardening.

All content from Kiddle encyclopedia articles (including the article images and facts) can be freely used under Attribution-ShareAlike license, unless stated otherwise. Cite this article:
Candy apple Facts for Kids. Kiddle Encyclopedia.