The Granny Smith is a tip-bearing apple cultivar, which originated in Australia in 1868. It is named after Maria Ann Smith, who propagated the cultivar from a chance seedling. The tree is thought to be a hybrid of Malus sylvestris, the European Wild Apple, with the domestic apple M. domestica as the polleniser. The fruit has hard, light green skin and a crisp, juicy flesh. 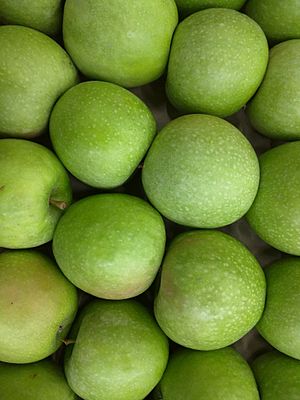 They go from being completely green to turning yellow when overripe. The acidity mellows significantly on ripening, and it takes on a balanced flavour.

Though also consumed raw, it is one of the most popular cooking apples. 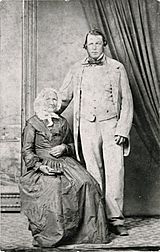 The Granny Smith cultivar originated in Eastwood, New South Wales, Australia (now a suburb of Sydney) in 1868. Its discoverer, Maria Ann Smith, had emigrated to the district from Beckley, East Sussex in 1839 with her husband Thomas. They purchased a small orchard in the area in 1855-1856 and began cultivating fruit, for which the area was a well known centre in colonial Australia. Smith had numerous children and was a prominent figure in the district, earning the nickname "Granny" Smith in her advanced years.

The first description of the origin of the Granny Smith apple was not published until 1924. In that year, Farmer and Settler published the account of a local historian who had interviewed two men who had known Smith. One of those interviewed recalled that in 1868 he (then twelve years old) and his father had been invited to Smith's farm to inspect a chance seedling that had sprung near a creek. Smith had dumped there among the ferns the remains of French crab-apples that had been grown in Tasmania. Another story recounted that Smith had been testing French crab-apples for cooking, and throwing the apple cores out her window as she worked, found that the new cultivar sprang up underneath her kitchen windowsill. Whatever the case, Smith took it upon herself to propagate the new cultivar on her property, finding the apples good for cooking and for general consumption. Having "all the appearances of a cooking apple", they were not tart but instead were "sweet and crisp to eat". She took a stall at Sydney's George Street market, where the apples stored "exceptionally well and became popular" and "once a week sold her produce there."

Smith died only a couple of years after her discovery (in 1870), but her work had been noticed by other local planters. Edward Gallard was one such planter, who extensively planted Granny Smith trees on his property and bought the Smith farm when Thomas died in 1876. Gallard was successful in marketing the apple locally, but it did not receive widespread attention until 1890. In that year, it was exhibited as "Smith's Seedling" at the Castle Hill Agricultural and Horticultural Show, and the following year it won the prize for cooking apples under the name "Granny Smith's Seedling". The apple was successful and the following year many were exhibiting Granny Smith apples at horticultural shows.

In 1895 the New South Wales Department of Agriculture recognised the cultivar and had begun growing the trees at the Government Experimental Station in Bathurst, New South Wales, recommending the gazette its properties as a late-picking cooking apple for potential export. Over the following years the government actively promoted the apple, leading to its widespread adoption. Its worldwide fame grew from the fact that it could be picked from March and stored until November. Enterprising fruit merchants in 1890s and 1900s experimented with methods to transport the apples overseas in cold storage. Because of its excellent shelf life the Granny Smith could be exported long distances and most times of the year, at a time when Australian food exports were growing dramatically on the back of international demand. Granny Smiths were exported in enormous quantities after the First World War, and by 1975, 40 percent of Australia's apple crop was Granny Smith. By this time it was being grown intensely elsewhere in the Southern Hemisphere, as well as in France and the United States. The advent of the Granny Smith apple is now celebrated annually in Eastwood with the Granny Smith Festival.

Apples are genetic hybrids that produce new genetic combinations in their seedlings. To preserve the exact genetic variation, grafting is the usual method of propagation (and cutting is sometimes used). All the Granny Smith apple trees grown today are clones from the original Smith tree in Sydney.

Granny Smith apples are light green in colour. They are popularly used in many apple dishes, such as apple pie, apple cobbler, apple crumble, and apple cake. They are also commonly eaten raw as table apples, and at least one company (Woodchuck Hard Cider) makes Granny Smith varietal cider.

It is moderately susceptible to fire blight and is highly prone to scab, powdery mildew, and cedar apple rust.

Granny Smith is much more easily preserved in storage than other apples, a factor which has greatly contributed to its success in export markets. Its long storage life has been attributed to its fairly low levels of ethylene production, and in the right conditions Granny Smiths can be stored without loss of quality for as long as a year. This cultivar needs fewer winter chill hours and a longer season to mature the fruit, so it is favoured for the milder areas of the apple growing regions. However, they are susceptible to superficial scald and bitter pit. Superficial scald may be controlled by treatment with diphenylamine before storage. It can also be controlled with low-oxygen storage. Pit can be controlled with calcium sprays during the growing season and with postharvest calcium dips.

Granny Smith is one of several apple cultivars that are high in antioxidant activity, and they have the highest concentration of phenols amongst the apple breeds. Some sources recommend Granny Smiths (among other apples) as a particularly efficient source of antioxidants, particularly the flavonoids cyanidin and epicatechin, especially if eaten with the skin intact. Granny Smiths are also naturally low in calories and high in dietary fiber and potassium, making them commonly recommended as a component of healthy and weight-loss diets.

According to the US Apple Association website, it is one of the fifteen most popular apple cultivars in the United States.

All content from Kiddle encyclopedia articles (including the article images and facts) can be freely used under Attribution-ShareAlike license, unless stated otherwise. Cite this article:
Granny Smith Facts for Kids. Kiddle Encyclopedia.