Apple cake is a popular dessert produced with the main ingredient of apples. Such a cake is made through the process of slicing this sweet fruit to add fragrance to a plain cake base. Traditional apple cakes go a step further by including various spices such as nutmeg or cinnamon, which give a unique flavor. Upon the addition of spices the batter can also be accompanied by crushed nuts, the most popular being walnuts and almonds.

Apples are also used in other cakes, including chocolate cake, where their water-retention can help a normally-dry cake to stay moist. In this case they may be either dried or fresh. 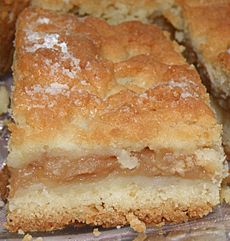 Apple cake called szarlotka or jabłecznik is a common traditional dessert in Poland, made from sweet crust pastry and spiced apple filling. It can be topped with kruszonka (crumbles), meringue, or a dusting of caster (powdered) sugar. An additional layer of budyń (a Polish variation of custard) sometimes can be found. In restaurants and cafes, it is usually served hot with whipped cream and coffee.

In Scandinavia, apple cakes are typically prepared from sour apples and baked in a dough made from sugar, butter, flour, eggs, and baking powder. The cake is then topped with apples, cinnamon and sugar, sometimes also chopped almonds. Apple crumble pie is also common.

All content from Kiddle encyclopedia articles (including the article images and facts) can be freely used under Attribution-ShareAlike license, unless stated otherwise. Cite this article:
Apple cake Facts for Kids. Kiddle Encyclopedia.