For the area of dry land see desert. 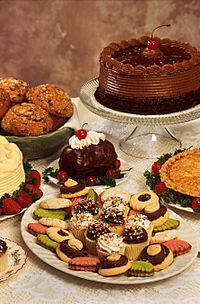 A dessert is a type of food that is eaten after lunch or dinner. It is usually a sweet food, like ice cream, cookies, and cakes. In some countries, cheeses such as Brie cheese and fruit are served as dessert. Some desserts are decorated, like birthday cakes. Others are simple, like pudding. Many desserts are baked (cooked in an oven). Some desserts are served with whipped cream as a topping.

Sweet desserts usually contain cane sugar, palm sugar, honey or some types of syrup such as molasses, maple syrup, treacle, or corn syrup. Other common ingredients in Western-style desserts are flour or other starches, Cooking fats such as butter or lard, dairy, eggs, salt, acidic ingredients such as lemon juice, and spices and other flavoring agents such as chocolate, peanut butter, fruits, and nuts. The proportions of these ingredients, along with the preparation methods, play a major part in the consistency, texture, and flavor of the end product.

Sugars contribute moisture and tenderness to baked goods. Flour or starch components serves as a protein and gives the dessert structure. Fats contribute moisture and can enable the development of flaky layers in pastries and pie crusts. The dairy products in baked goods keep the desserts moist. Many desserts also contain eggs, in order to form custard or to aid in the rising and thickening of a cake-like substance. Egg yolks specifically contribute to the richness of desserts. Egg whites can act as a leavening agent or provide structure. Further innovation in the healthy eating movement has led to more information being available about vegan and gluten-free substitutes for the standard ingredients, as well as replacements for refined sugar. Desserts can contain many spices and extracts to add a variety of flavors. Salt and acids are added to desserts to balance sweet flavors and create a contrast in flavors.

Some desserts are made with coffee,a coffee-flavoured version of a dessert can be made, for example an iced coffee soufflé or coffee biscuits. Alcohol can also be used as an ingredient, to make alcoholic desserts.

Biscuits, (from the Old French word bescuit originally meaning twice-baked in Latin, also known as "cookies" in North America, are flattish bite-sized or larger short pastries generally intended to be eaten out of the hand. Biscuits can have a texture that is crispy, chewy, or soft. Examples include layered bars, crispy meringues, and soft chocolate chip cookies. 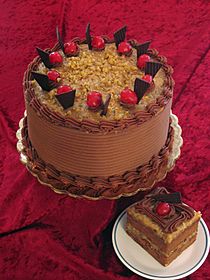 Cakes are sweet tender breads made with sugar and delicate flour. Cakes can vary from light, airy sponge cakes to dense cakes with less flour. Common flavourings include dried, candied or fresh fruit, nuts, cocoa or extracts. They may be filled with fruit preserves or dessert sauces (like pastry cream), iced with buttercream or other icings, and decorated with marzipan, piped borders, or candied fruit. Cake is often served as a celebratory dish on ceremonial occasions, for example weddings, anniversaries, and birthdays. Small-sized cakes have become popular, in the form of cupcakes and petits fours. 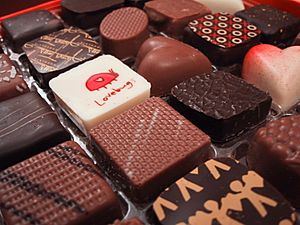 Candy, also called sweets or lollies, is a confection that features sugar as a principal ingredient. Many candies involve the crystallization of sugar which varies the texture of sugar crystals. Candies comprise many forms including caramel, marshmallows, and taffy. 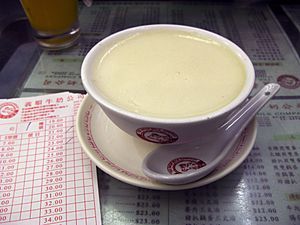 These kinds of desserts usually include a thickened dairy base. Custards are cooked and thickened with eggs. Baked custards include crème brûlée and flan. Puddings are thickened with starches such as cornstarch or tapioca. Custards and puddings are often used as ingredients in other desserts, for instance as a filling for pastries or pies.

Many cuisines include a dessert made of deep-fried starch-based batter or dough. In many countries a doughnut is a flour-based batter that has been deep-fried. It is sometimes filled with custard or jelly. Fritters are fruit pieces in a thick batter that have been deep fried. Gulab jamun is an Indian dessert made of milk solids kneaded into a dough, deep-fried, and soaked in honey. Churros are a deep-fried and sugared dough that is eaten as dessert or a snack in many countries. Doughnuts are most famous for being a trademark favorite of fictional character Homer Simpson from the animated television series The Simpsons. 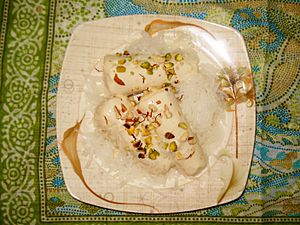 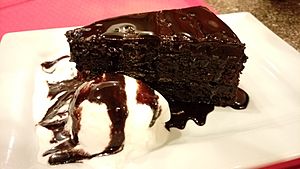 Ice cream, gelato, sorbet and shaved-ice desserts fit into this category. Ice cream is a cream base that is churned as it is frozen to create a creamy consistency. Gelato uses a milk base and has less air whipped in than ice cream, making it denser. Sorbet is made from churned fruit and is not dairy based. Shaved-ice desserts are made by shaving a block of ice and adding flavored syrup or juice to the ice shavings.

Jellied desserts are made with a sweetened liquid thickened with gelatin or another thickening agent. They are traditional in many cultures. Grass jelly and annin tofu are Chinese jellied desserts. Yōkan is a Japanese jellied dessert. In English-speaking countries, many dessert recipes are based on gelatin with fruit or whipped cream added. 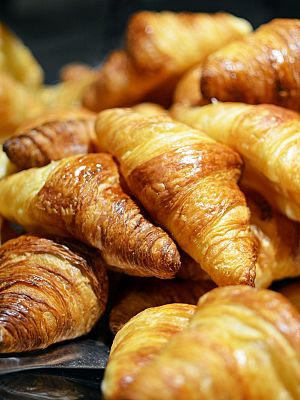 Pies and cobblers are a crust with a filling. The crust can be either made from either a pastry or crumbs. Pie fillings range from fruits to puddings; cobbler fillings are generally fruit-based. Clafoutis are a batter with fruit-based filling poured over the top before baking. 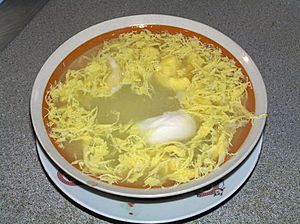 Tong sui, literally translated as "sugar water" and also known as tim tong, is a collective term for any sweet, warm soup or custard served as a dessert at the end of a meal in Cantonese cuisine. Tong sui are a Cantonese specialty and are rarely found in other regional cuisines of China. Outside of Cantonese-speaking communities, soupy desserts generally are not recognized as a distinct category, and the term tong sui is not used. 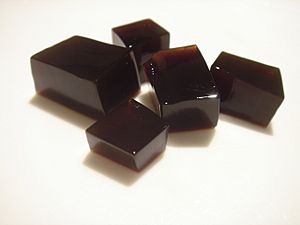 Throughout much of central and western Africa, there is no tradition of a dessert course following a meal. Fruit or fruit salad would be eaten instead, which may be spiced, or sweetened with a sauce. In some former colonies in the region, the colonial power has influenced desserts – for example, the Angolian cocada amarela (yellow coconut) resembles baked desserts in Portugal.

Bubble tea is famous for it's varieties of flavors with bubbles and jellies.

In Asia, desserts are often eaten between meals as snacks rather than as a concluding course. There is widespread use of rice flour in East Asian desserts, which often include local ingredients such as coconut milk, palm sugar, and tropical fruit. In India, where sugarcane has been grown and refined since before 500 BCE, desserts have been an important part of the diet for thousands of years; types of desserts include burfis, halvahs, jalebis, and laddus.

Dessert nowadays are made into drinks as well, such as Bubble Tea. It is originated in Taiwan, which locates in East Asia. Bubble tea is a kind of dessert made with flavor tea or milk with tapioca. It is well-known across the world. 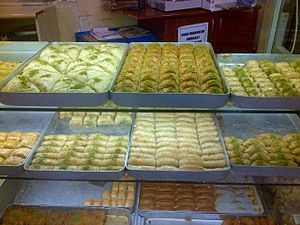 In Ukraine and Russia, breakfast foods such as nalysnyky or blintz or oladi (pancakes), and syrniki are served with honey and jam as desserts.

European colonization of the Americas yielded the introduction of a number of ingredients and cooking styles. The various styles continued expanding well into the 19th and 20th centuries, proportional to the influx of immigrants. 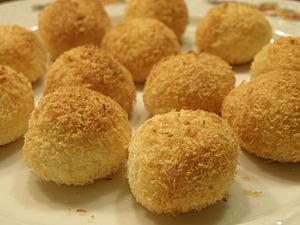 Cocadas are a traditional coconut candy or confectionery found in many parts of Latin America, made with eggs and shredded coconut.

Dulce de leche is a very common confection in Argentina. In Bolivia, sugarcane, honey and coconut are traditionally used in desserts. Tawa tawa is a Bolivian sweet fritter prepared using sugar cane, and helado de canela is a dessert that is similar to sherbet which is prepared with cane sugar and cinnamon. Coconut tarts, puddings cookies and candies are also consumed in Bolivia. Brazil has a variety of candies such as brigadeiros (chocolate fudge balls), cocada (a coconut sweet), beijinhos (coconut truffles and clove) and romeu e julieta (cheese with a guava jam known as goiabada). Peanuts are used to make paçoca, rapadura and pé-de-moleque. Local common fruits are turned in juices and used to make chocolates, popsicles and ice cream. In Chile, kuchen has been described as a "trademark dessert." Several desserts in Chile are prepared with manjar, (caramelized milk), including alfajor, flan, cuchufli and arroz con leche. Desserts consumed in Colombia include dulce de leche, waffle cookies, puddings, nougat, coconut with syrup and thickened milk with sugarcane syrup. Desserts in Ecuador tend to be simple, and desserts are a moderate part of the cuisine. Desserts consumed in Ecuador include tres leches cake, flan, candies and various sweets.

Desserts are typically eaten in Australia, and most daily meals "end with simple desserts," which can include various fruits. More complex desserts include cakes, pies and cookies, which are sometimes served during special occasions.

The market for desserts has grown over the last few decades, which was greatly increased by the commercialism of baking desserts and the rise of food productions. Desserts are present in most restaurants as the popularity has increased. Many commercial stores have been established as solely desserts stores. Ice cream parlors have been around since before 1800. Many businesses started advertising campaigns focusing solely on desserts. The tactics used to market desserts are very different depending on the audience for example desserts can be advertised with popular movie characters to target children. The rise of companies like Food Network has marketed many shows which feature dessert and their creation. Shows like these have displayed extreme desserts and made a game show atmosphere which made desserts a more competitive field.

Desserts are a standard staple in restaurant menus, with different degrees of variety. Pie and cheesecake were among the most popular dessert courses ordered in U.S. restaurants in 2012.

All content from Kiddle encyclopedia articles (including the article images and facts) can be freely used under Attribution-ShareAlike license, unless stated otherwise. Cite this article:
Dessert Facts for Kids. Kiddle Encyclopedia.