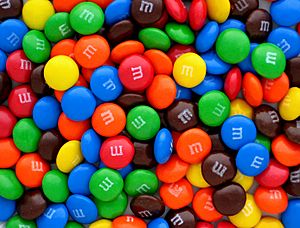 M&Ms are a type of candy

Candy is a sweet kind of food that is usually made from sugar and water, with flavours and other ingredients added. The word candy comes from the Persian word for "cane sugar", and probably also from Sanskrit khanda, which means "piece (of sugar)".

Candy is found in almost any store because they are made in many companies. Candy can also be made at home. Many people like candy and think it tastes good. Other people do not like it. Candy contains lots of sugar, so it is not very healthy, but can be eaten sometimes. It is the most common snacking food, and there are hundreds of flavours, shapes, and sizes.

Candy, also called sweets or lollies, is a confection that features sugar as a principal ingredient. The category, called sugar confectionery, encompasses any sweet confection, including chocolate, chewing gum, and sugar candy. Vegetables, fruit, or nuts which have been glazed and coated with sugar are said to be candied.

Physically, candy is characterized by the use of a significant amount of sugar or sugar substitutes. Unlike a cake or loaf of bread that would be shared among many people, candies are usually made in smaller pieces. However, the definition of candy also depends upon how people treat the food. Unlike sweet pastries served for a dessert course at the end of a meal, candies are normally eaten casually, often with the fingers, as a snack between meals. Each culture has its own ideas of what constitutes candy rather than dessert. The same food may be a candy in one culture and a dessert in another.

Candy is made by dissolving sugar in water or milk to form a syrup, which is boiled until it reaches the desired concentration or starts to caramelize. Candy comes in a wide variety of textures, from soft and chewy to hard and brittle. The texture of candy depends on the ingredients and the temperatures that the candy is processed at.

Most candies are made commercially. The industry relies significantly on trade secret protection, because candy recipes cannot be copyrighted or patented effectively, but are very difficult to duplicate exactly. Seemingly minor differences in the machinery, temperature, or timing of the candy-making process can cause noticeable differences in the final product.

Even in a culture that eats sweets frequently, candy is not a significant source of nutrition or food energy for most people.

Candy generally contains sugar, which is a key environmental factor in the formation of dental caries (cavities). Several types of bacteria commonly found in the mouth consume sugar, particularly Streptococcus mutans. When these bacteria metabolize the sugar found in most candies, juice, or other sugary foods, they produce acids in the mouth that demineralize the tooth enamel and can lead to dental caries. Heavy or frequent consumption of high-sugar foods, especially lollipops, sugary cough drops, and other sugar-based candies that stay in the mouth for a long time, increases the risk of tooth decay. Candies that also contain enamel-dissolving acids, such as acid drops, increase the risk. Cleaning the teeth and mouth shortly after eating any type of sugary food, and allowing several hours to pass between eating such foods, reduces the risk and improves oral health.

Candies that primarily consist of peppermint and mint, such as candy canes, have digestive benefits. Peppermint oil can help soothe an upset stomach by creating defense against irritable bowel syndrome and is effective in killing germs.

When eaten in moderation, dark chocolate can have health benefits. The cocoa in chocolate can help reduce the risk of heart disease. Vitamins and minerals such as calcium, magnesium, and sodium can be found in chocolate, as well as antioxidants.

All content from Kiddle encyclopedia articles (including the article images and facts) can be freely used under Attribution-ShareAlike license, unless stated otherwise. Cite this article:
Candy Facts for Kids. Kiddle Encyclopedia.