Liquorice (British English) or licorice (American English) ( lik-ƏR-is(h)) is a confection usually flavoured and coloured black with the extract of the roots of the liquorice plant Glycyrrhiza glabra. A wide variety of liquorice sweets are produced around the world. In North America, black liquorice is distinguished from similar confectionery varieties that are not flavoured and coloured black with liquorice extract but commonly manufactured in the form of chewy ropes or tubes. So called "black liquorice" together with anise extract is also a widespread flavour in other forms of confectionery such as jellybeans. In addition to these, various other liquorice-based sweets are sold in the United Kingdom, such as liquorice allsorts. Dutch and Nordic liquorice characteristically contains ammonium chloride instead of sodium chloride, prominently so in salty liquorice. 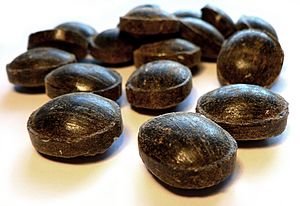 During manufacturing, the ingredients are dissolved in water and heated to 135 °C (275 °F). In order to obtain sweets of the desired shapes, the liquid is poured into molds that are created by impressing holes into a container filled with starch powder. The liquid is then dried and the resulting sweets are sprayed with beeswax to make their surface shiny. 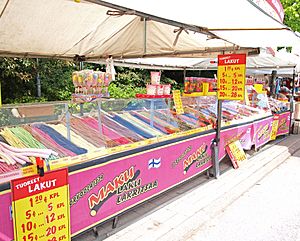 The liquorice-root extract contains the natural sweetener glycyrrhizin, which is over 50 times sweeter than sucrose. This ingredient has various pharmaceutical properties. It acts as an expectorant (facilitating removal of mucus from the lungs by coughing) and it increases blood pressure. The latter effect can become significant with a daily consumption of 50 g or more of liquorice candy for as little as two weeks. Glycyrrhizin can cause potassium levels in the body to fall, triggering abnormal heart rhythms, as well as high blood pressure, edema (swelling), lethargy, and congestive heart failure in some people.

Liquorice has several varied uses in herbal medicine, such as acting as a mild laxative by increasing prostaglandins.

Comparative studies of pregnant women suggest that excessive amounts of liquorice (100 g a week) may adversely affect both IQ and behaviour traits of offspring.

Some people report that black liquorice confectionery causes their stools to become green, although this is probably due to the blue food colouring used by many manufacturers.

Alexander the Great supplied his troops with rations of liquorice root whilst marching because of its thirst-quenching qualities.

An excessive amount of black liquorice consumption can cause a chloride-resistant metabolic alkalosis; in at least one extreme case, where a man from Massachusetts, United States, ate a bag and a half of black liquorice every day for several weeks, this has led to death due to an increase in glycyrrhizic acid and a lethal decrease in potassium. 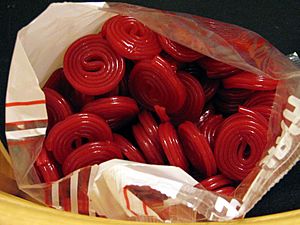 In many countries there is also a product sometimes known as red liquorice (red licorice), which is extruded in a way to resemble liquorice strings but made with main flavourings other than liquorice, such as strawberry, cherry, raspberry, or cinnamon. More recently, similar products have been introduced in a wider variety of colours and flavours, including apple, mango, blackcurrant, and watermelon.

While the common name for this confectionery has now become "red liquorice" or often simply "liquorice", it does not have the taste of liquorice. "Black" in "black liquorice" would formerly have been redundant, and has become a retronym in North America. 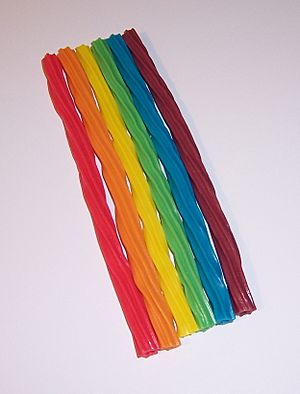 All content from Kiddle encyclopedia articles (including the article images and facts) can be freely used under Attribution-ShareAlike license, unless stated otherwise. Cite this article:
Liquorice (confectionery) Facts for Kids. Kiddle Encyclopedia.