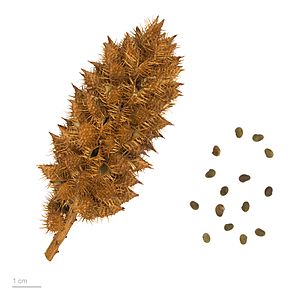 Liquorice (UK) or licorice (US) (see spelling differences) is the root of Glycyrrhiza glabra, from which a sweet flavour can be extracted.

The liquorice plant is a legume (related to beans and peas) and native to southern Europe and parts of Asia. It is an herbaceous perennial, growing to 1 m in height, with pinnate leaves about 7–15 centimetres (3–6 inches) long, with 9–17 leaflets. The flowers are 0.8–1.2 cm (1/3 to 1/2 inch) long, purple to pale whitish blue, produced in a loose inflorescence. The fruit is an oblong pod, 2–3 centimetres (about 1 inch) long, containing several seeds.

The world's leading manufacturer of liquorice products is M&F Worldwide, which manufactures more than 70% of the worldwide liquorice flavours sold to end users.

Most liquorice was once used as a flavouring agent for tobacco for flavour enhancing and moistening agents in the manufacture of American blend cigarettes, moist snuff, chewing tobacco, and pipe tobacco. 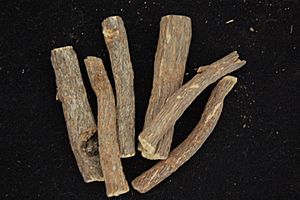 Liquorice flavour is found in a wide variety of candies or sweets. In most of these candies, the taste is reinforced by aniseed oil so the actual content of liquorice is very low. Liquorice confections are primarily purchased by consumers in the European Union.

In the Netherlands, liquorice confectionery (drop) is one of the most popular forms of sweets. It is sold in many forms. Mixing it with mint, menthol, aniseed, or laurel is quite popular. Mixing it with ammonium chloride (salmiak) is also popular. A popular liquorice in the Netherlands is known as zoute drop (salty liquorice), but contains very little salt, i.e., sodium chloride. The salty taste is due to ammonium chloride. Strong, salty sweets are also popular in Nordic countries.

Dried sticks of the liquorice root are also a traditional confectionery in their own right in the Netherlands, which has quickly waned in popularity in recent decades. They were sold simply as sticks of zoethout ('sweet wood') to chew on as a candy. Through chewing and suckling, the intensely sweet flavour is released. The sweetness is 30 to 50 times as strong as sucrose, without causing damage to teeth. Roughly since the 1970s, zoethout has become rarer in favor of easier to consume candies (including 'drop').

Pontefract in Yorkshire was the first place where liquorice mixed with sugar began to be used as a sweet in the same way it is in the modern day. Pontefract cakes were originally made there. In County Durham, Yorkshire and Lancashire, it is colloquially known as 'Spanish', supposedly because Spanish monks grew liquorice root at Rievaulx Abbey near Thirsk. 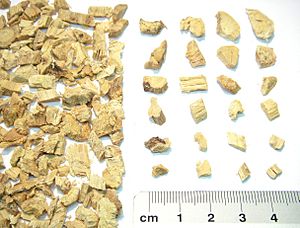 In Italy (particularly in the south), Spain and France, liquorice is popular in its natural form. The root of the plant is simply dug up, washed, dried, and chewed as a mouth freshener. Throughout Italy, unsweetened liquorice is consumed in the form of small black pieces made only from 100% pure liquorice extract; the taste is bitter. In Calabria a popular liqueur is made from pure liquorice extract. Liquorice is used in Syria and Egypt, where it is sold as a drink, in shops as well as street vendors.

All content from Kiddle encyclopedia articles (including the article images and facts) can be freely used under Attribution-ShareAlike license, unless stated otherwise. Cite this article:
Liquorice Facts for Kids. Kiddle Encyclopedia.