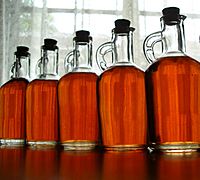 A liqueur is a sweet-tasting alcoholic drink. It is often flavored with fruits, herbs, spices, flowers, seeds, roots, plants, barks, and sometimes cream. The word liqueur comes from the Latin word liquifacere which means "to dissolve." This is because the flavors are dissolved to help make the liqueur. In some parts of the world, liqueurs are sometimes called cordials.

Liqueurs have been around for many centuries. They are related to the herbal medicines that monks used to make. Liqueurs were made in Italy as early as the 13th century, and were used during signings of treaties during the Middle Ages.

Liqueurs can be enjoyed many ways. They are commonly drank by themselves, poured over ice, with coffee, or mixed with cream or other mixers to create cocktails. They are often served with dessert or as a dessert. Liqueurs may also be used in cooking.

All content from Kiddle encyclopedia articles (including the article images and facts) can be freely used under Attribution-ShareAlike license, unless stated otherwise. Cite this article:
Liqueur Facts for Kids. Kiddle Encyclopedia.