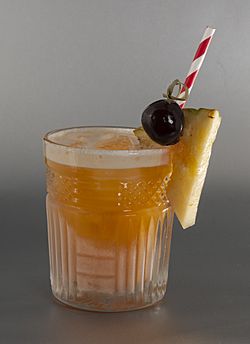 A cocktail is a kind of mixed drink. Usually, it is made with alcoholic drinks such as vodka, gin or rum. Since such spirits do not have much taste of their own (at around 40% alcohol), other ingredients are added.

Common ingredients are fruits, fruit juice, sugar, crushed ice, and ice cubes. If the cocktail is served in a bar or nightclub, it often comes with a piece of fruit on top. For example, a gin and tonic could have a lemon, a Piña Colada could have a pineapple and a cherry.

Most cocktails were invented in the late 19th or early 20th centuries. People began drinking a lot of cocktails in the United States in the 1920s due to Prohibition. Around that time, cocktails from Cuba, such as the mojito, became popular around the world.

There are many non-alcholic cocktails also, so people of many ages may drink them.

All content from Kiddle encyclopedia articles (including the article images and facts) can be freely used under Attribution-ShareAlike license, unless stated otherwise. Cite this article:
Cocktail Facts for Kids. Kiddle Encyclopedia.