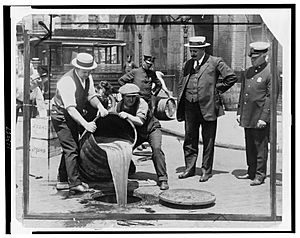 Removal of liquor during Prohibition.

The Prohibition Era was a period in United States history when alcohol was outlawed. Police would arrest anyone who was found making or selling alcohol illegally. The Women's Christian Temperance Union and other reformist organizations agitated for this change. Prohibition lasted from 1920 to 1933. It was established by the Eighteenth Amendment to the United States Constitution. It was ratified (approved by the states) by January 16, 1919. It came into effect at January 16, 1920.

Prohibition was good as the consumption of alcohol was reduced, but it was bad in that the Mafia and other underground organizations took up rum-running. They became big and powerful and made trouble. Prohibition was repealed December 5, 1933 by the Twenty-first Amendment. Now states can regulate the selling of liquor by themselves.

All content from Kiddle encyclopedia articles (including the article images and facts) can be freely used under Attribution-ShareAlike license, unless stated otherwise. Cite this article:
Prohibition Era Facts for Kids. Kiddle Encyclopedia.