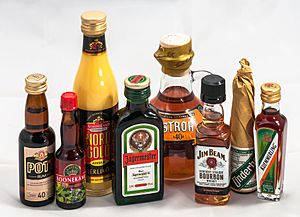 Liquor is any alcoholic drink containing ethanol and produced by distilling. They are also called distilled beverages. The term hard liquor is used around North America and India to tell distilled beverages from those that are weaker. If the beverage carries no added sugar or has at least 20% alcohol by volume, it is referred to as a spirit. Alcoholic beverages are under different regulations around the world.

All content from Kiddle encyclopedia articles (including the article images and facts) can be freely used under Attribution-ShareAlike license, unless stated otherwise. Cite this article:
Liquor Facts for Kids. Kiddle Encyclopedia.