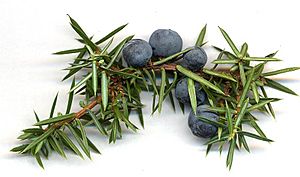 A juniper berry is the female seed cone produced by the various species of junipers. It is not a true berry but a cone with unusually fleshy and merged scales, which give it a berry-like appearance. The cones from a handful of species, especially Juniperus communis, are used as a spice, particularly in European cuisine, and also give gin its distinctive flavour. Juniper berries may be the only spice derived from conifers. However, tar and bark from pine trees are sometimes thought of as spices, too. 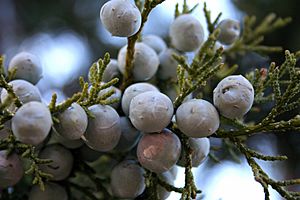 Fresh berries on the juniper tree

The flavor profile of young, green berries is dominated by pinene; as they mature this piney, resinous backdrop is joined by "green-fresh" and citrus notes. The outer scales of the berries are relatively flavourless, so the berries are almost always at least lightly crushed before being used as a spice. They are used both fresh and dried, but their flavour and odour are at their strongest immediately after harvest and decline during drying and storage. 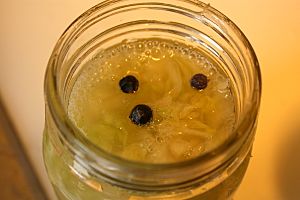 Juniper berries to flavor the cabbage fermented for saurkraut 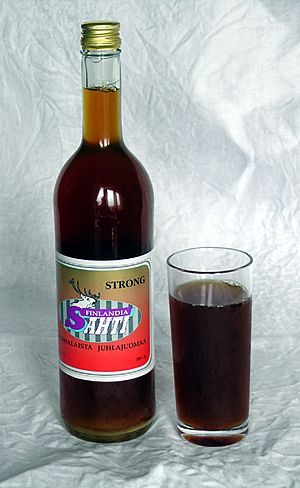 Juniper, typically Juniperus communis, is used to flavor gin, a liquor developed in the 17th century in the Netherlands. The name gin itself is derived from either the French genièvre or the Dutch jenever, which both mean "juniper". Other juniper-flavoured beverages include the Finnish rye-and-juniper beer known as sahti, which is flavored with both juniper berries and branches.

Another drink made from the berries is a Julmust, a soft drink made in Sweden mainly sold during Christmas. The brand Dry Soda produces a juniper-berry soda as part of its lineup. Recently, some American distilleries have begun using 'New World' varieties of juniper such as Juniperus occidentalis.

A few North American juniper species produce a seed cone with a sweeter, less resinous flavor than those typically used as a spice. Such species have been used not just as a seasoning but as a nutritive food by some Native Americans. In addition to medical and culinary purposes, Native Americans have also used the seeds inside juniper berries as beads for jewellery and decoration.

An essential oil extracted from juniper berries is used in aromatherapy and perfumery.

All content from Kiddle encyclopedia articles (including the article images and facts) can be freely used under Attribution-ShareAlike license, unless stated otherwise. Cite this article:
Juniper berry Facts for Kids. Kiddle Encyclopedia.