A cone (in formal botanical usage: strobilus, plural strobili) is an organ on plants in the division Pinophyta (conifers) that contains the reproductive structures. The familiar woody cone is the seed-producing female cone. The male cones, which produces pollen, are usually herbaceous and much less conspicuous even at full maturity. The name "cone" derives from the fact that the shape in some species resembles a geometric cone.

male cones of a pine

The male cone (microstrobilus or pollen cone) is structurally similar across all conifers, differing only in small ways (mostly in scale arrangement) from species to species. Extending out from a central axis are microsporophylls (modified leaves). Under each microsporophyll is one or several microsporangia (pollen sacs). The photo (right) shows mature male pine cones shortly after pollen release.

The female cone (megastrobilus, seed cone, or ovulate cone) contains ovules within, which when fertilized by pollen, become seeds. The female cone structure varies more markedly between the different conifer families, and is often crucial for the identification of many species of conifers, in as much as seeing the foliage alone may be insufficient to differentiate between closely related species.

Female cones of the conifer families

The members of the pine family (pines, spruces, firs, cedars, larches, etc) have cones that are imbricate with scales overlapping each other like fish-scales. These are the "archetypal" cone. The scales are spirally arranged in fibonacci number ratios.

The female cone has two types of scale, the bract scales, derived from a modified leaf, and the seed scales (or ovuliferous scales), one subtending each bract scale, derived from a highly modified branchlet. On the upper-side base of each seed scale are two ovules that develop into seeds after fertilisation by pollen grains. The bract scales develop first, and are conspicuous at the time of pollination; the seed scales develop later to enclose and protect the seeds, with the bract scales often not growing further. The scales open temporarily to receive pollen, then close during fertilisation and maturation, and then re-open again at maturity to allow the seed to escape. Maturation takes 6-8 months from pollination in most Pinaceae genera, but 12 months in cedars and 18-24 months (rarely more) in most pines. The cones open either by the seed scales flexing back when they dry out, or (in firs, cedars and golden larch) by the cones disintegrating with the seed scales falling off. The cones are conic, cylindrical or ovoid (egg-shaped), and small to very large, from 2-60 cm long and 1-20 cm broad.

Members of the Araucariaceae (Araucaria, Agathis, Wollemia) have the bract and seed scales fully fused, and have only one ovule on each scale. The cones are spherical or nearly so, and large to very large, 5-30 cm diameter, and mature in 18 months; at maturity, they disintegrate to release the seeds. In Agathis, the seeds are winged and separate readily from the seed scale, but in the other two genera, the seed is wingless and fused to the scale.

The cones of the Podocarpaceae are similar in function, though not in development, to those of the Taxaceae (q.v. below), being berry-like with the scales highly modified, evolved to attract birds into dispersing the seeds. In most of the genera, two to ten or more scales are fused together into a usually swollen, brightly coloured, soft, edible fleshy aril. Usually only one or two scales at the apex of the cone are fertile, each bearing a single wingless seed, but in Saxegothaea several scales may be fertile. The fleshy scale complex is 0.5-3 cm long, and the seeds 4-10 mm long. In some genera (e.g. Prumnopitys), the scales are minute and not fleshy, but the seed coat develops a fleshy layer instead, the cone having the appearance of one to three small plums on a central stem. The seeds have a hard coat evolved to resist digestion in the bird's stomach, and is passed in the bird's droppings. 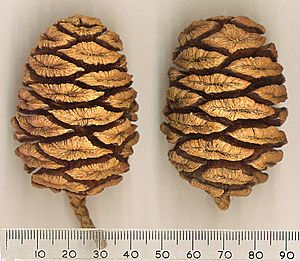 Members of the cypress family (cypresses, arborvitae, junipers, redwoods, etc) differ in that the bract and seed scales are fully fused, with the bract visible as no more than a small lump or spine on the scale. The botanical term galbulus (plural galbuli; from the Latin for a cypress cone) is sometimes used instead of strobilus for members of this family. The female cones have one to 20 ovules on each scale. They often have peltate scales, as opposed to the imbricate cones described above, though some have imbricate scales. The cones are usually small, 0.3-6 cm long, and often spherical or nearly so, like those of Nootka Cypress, while others, such as Western Redcedar, are narrow. The scales are arranged either spirally, or in decussate whorls of two (opposite pairs) or three, rarely four. The genera with spiral scale arrangement were often treated in a separate family (Taxodiaceae) in the past. In most of the genera, the cones are woody and the seeds have two narrow wings (one along each side of the seed), but in three genera (Platycladus, Microbiota and Juniperus), the seeds are wingless, and in Juniperus, the cones are fleshy and berry-like.

The cones and seeds of Sciadopitys (the only member of the family) are similar to those of some Cupressaceae, but larger, 6-11 cm long; the scales are imbricate and spirally arranged, and have 5-9 ovules on each scale.

Members of the yew family and the closely related Cephalotaxaceae have the most highly modified cones of any conifer. There is only one scale in the female cone, with a single ovule. The scale develops into a soft, brightly coloured sweet, juicy, berry-like aril which partly encloses the seed. The whole 'berry' with the seed is eaten by birds, which digest the sugar-rich scale and pass the hard seed in their droppings, so dispersing the seed far from the parent plant.

For most species, male and female cones occur on the same plant (tree or shrub), with female usually on the higher branches towards the top of the plant. This distribution is thought to improve chances of cross-fertilization, as pollen is unlikely to be blown vertically upward within the crown of one plant, but can drift slowly upward in the wind, blowing from low on one plant to higher on another plant. In some conifers, male cones additionally often grow clustered in large numbers together, while female cones are more often produced singly or in only small clusters. 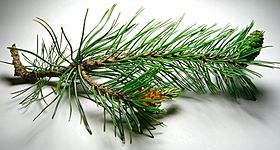 Dozens of male cones (orange and flower-like) occur in a cluster; the female cone is still immature (olive green)

A further charateristic arrangement of pines is that the male cones are located at the base of the branch, while the female at the tip (of the same or a different branchlet). However, in larches and cedars, both types of cones are always at the tips of short shoots, while both sexs of fir cones are always from side buds, never terminal. There's also some diversity in bearing in Cupressaceae. Some, Cupressus for instance, has little or no differentiation in the positions of male and female cones.

Conifer cones and their seeds have been used for lots of different purposes. They are often used for decorations. Some seeds, for example, the seeds of pinyon pines, are used in prepared foods and baking.

Most mature cones are closed when wet and open when dry. In a few species, it takes fire to open the cones.

All content from Kiddle encyclopedia articles (including the article images and facts) can be freely used under Attribution-ShareAlike license, unless stated otherwise. Cite this article:
Conifer cone Facts for Kids. Kiddle Encyclopedia.