The Pseudotsuga menziesii var. glauca, or Rocky Mountain Douglas-fir is a large evergreen tree in the genus Pseudotsuga in the plant family Pinaceae. The tree is native to British Columbia, Idaho and Colorado.

Rocky Mountain Douglas-fir is a large tree, typically reaching 35-45 m in height and 1 m in diameter, with exceptional specimens known to 67 m tall, and 2 m diameter. It commonly lives more than 500 years and occasionally more than 1,200 years. The bark on young trees is thin, smooth, gray, and covered with resin blisters. On mature trees, it is moderately thick (3-6 cm), furrowed and corky though much less so than Coast Douglas-fir. 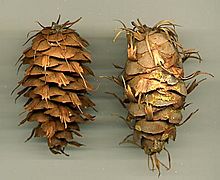 The shoots are brown to gray-brown, smooth, though not as smooth as fir shoots, and finely pubescent with scattered short hairs. The buds are a distinctive narrow conic shape, 3-6 mm long, with red-brown bud scales. The leaves are spirally arranged but slightly twisted at the base to be upswept above the shoot, needle-like, 2-3 cm long, gray-green to blue-green above with a single broad stomatal patch, and with two whitish stomatal bands below. Unlike the Coast Douglas-fir, Rocky Mountain Douglas-fir foliage has no noticeable scent.

The male (pollen) cones are 2-3 cm long, and are typically restricted to or more abundant on lower branches. Pollen cones develop over 1 year and wind-dispersed pollen is released for several weeks in the spring.

The mature female seed cones are pendent, 4-7 cm long, 2 cm broad when closed, opening to 3-4 cm broad. They are produced in spring, purple (sometimes green) at first, maturing orange-brown in the autumn 5-7 months later. The seeds are 5-6 mm long and 3-4 mm broad, with a 12-15 mm wing. Both Coast and Rocky Mountain Douglas-fir produce abundant crops of seed approximately every 2-11 years. Seed is produced annually except for about 1 year in any 4-to-5-year period.

There are two varieties, which have proved distinct on genetic testing (Li & Adams, 1989):

The oldest accurately-dated Rocky Mountain Douglas-fir, 1275 years old, is in New Mexico. This longevity is apparently an anomaly; growing on a relatively barren lava field has protected it from fire, animals, and humans. Growth typically slows dramatically between 90 and 140 years of age.

Chipmunks, mice, voles, and shrews eat large quantities of conifer seeds from the forest floor, and clipped cones are a staple and major part of storage of red squirrels. These animals store a large amount of Rocky Mountain Douglas-fir cones or seeds. American Marten commonly den in hollow logs.

The Douglas-fir is vulnerable to infestation by a woolly aphid, Adelges cooleyi that also infects the Cooley spruce to complete its lifecycle.

All content from Kiddle encyclopedia articles (including the article images and facts) can be freely used under Attribution-ShareAlike license, unless stated otherwise. Cite this article:
Rocky Mountain Douglas-fir Facts for Kids. Kiddle Encyclopedia.