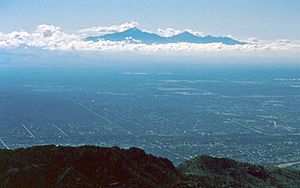 View of the Santa Rita Mountains across the Tucson valley from the Santa Catalina Mountains. The Santa Ritas are among the most prominent of the "sky islands" in southern Arizona. 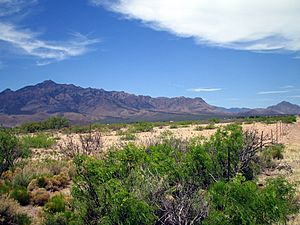 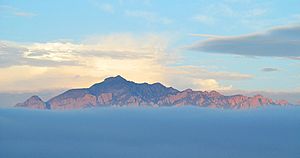 Sky islands are isolated mountains surrounded by radically different lowland environments. The term originally referred to those found near the southern borders of the US States of Arizona and New Mexico with the northern borders of the Mexican States of Chihuahua and Sonora, and has extended to similarly isolated high-altitude forests. The isolation has significant implications for these natural habitats. The American Southwest region began warming up between ∼20,000–10,000 years BP and atmospheric temperatures increased substantially, resulting in the formation of vast deserts that isolated the sky islands. Endemism, altitudinal migration, and relict populations are some of the natural phenomena to be found on sky islands.

The complex dynamics of species richness on sky islands draws attention from the discipline of biogeography, and likewise the biodiversity is of concern to conservation biology. One of the key elements of a sky island is separation by physical distance from the other mountain ranges, resulting in a habitat island, such as a forest surrounded by desert.

Some sky islands serve as refugia for boreal species stranded by warming climates since the last glacial period. In other cases, localized populations of plants and animals tend towards speciation, similar to oceanic islands such as the Galápagos Islands of Ecuador.

The sky island concept originated in 1943 when Natt N. Dodge, in an article in Arizona Highways magazine, referred to the Chiricahua Mountains in southeastern Arizona as a "mountain island in a desert sea".

In about the same era, the term was used to refer to high alpine, unglaciated, ancient topographic landform surfaces on the crest of the Sierra Nevada, California.

The term was popularized by nature writer Weldon Heald, a resident of southeastern Arizona. In his 1967 book, Sky Island, he demonstrated the concept by describing a drive from the town of Rodeo, New Mexico, in the western Chihuahuan desert, to a peak in the Chiricahua Mountains, 56 kilometres (35 miles) away and 1,700 metres (5,600 feet) higher in elevation, ascending from the hot, arid desert, to grasslands, then to oak-pine woodland, pine forest, and finally to spruce-fir-aspen forest. His book mentions the concept of biome, but prefers the terminology of life zones, and makes reference to the work of Clinton Hart Merriam. The book also describes the wildlife and living conditions of the Chiricahuas.

Around the same time, the idea of mountains as islands of habitat took hold with scientists and has been used by such popular writers as David Quammen and John McPhee. This concept falls within the study of island biogeography. It is not limited to mountains in southwestern North America but can be applied to mountains, highlands, and massifs around the world. 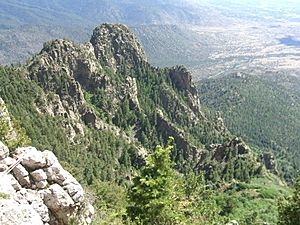 The Madrean sky islands are probably the most studied sky islands in the world. Found in the U.S. states of New Mexico and Arizona and the Mexican states of Chihuahua and Sonora, these numerous mountains form links in a chain connecting the northern end of the Sierra Madre Occidental and the southern Colorado Plateau. Sky islands of the central and northern mountains in the United States are often called island ranges, especially by populations within view of such islands of mountains surrounded by plains such as those found within the Wichita Mountains of southwestern Oklahoma. 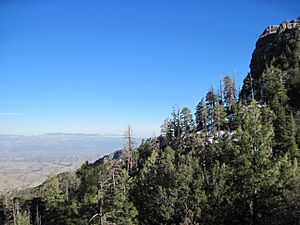 View from above 2,100 m (7,000 ft) in the Santa Catalina Mountains, showing pines and snow in the foreground and desert beyond

Some more northerly examples are the Crazy Mountains, Castle Mountains, Bears Paw Mountains, Highwood Mountains, and Little Rocky Mountains, all in the US state of Montana. Each of these ranges is forested and has tundra and snowpack above treeline, but is not connected to any other range by forested ridges; the ranges are completely surrounded by treeless prairie and/or semi-arid scrubland below. Other well-known sky islands of North America are the Great Basin montane forests, such as the White Mountains in California, and the Spring Mountains near Las Vegas, Nevada. One of the unique aspects of the sky islands of the U.S.-Mexico border region is the mix of floristic affinities, that is, the trees and plants of higher elevations are more characteristic of northern latitudes, while the flora of the lower elevations has ties to the desert and the mountains further south. Some unique plants and animals are found in these sky islands, such as the mountain yucca, Mount Graham red squirrel, Huachuca springsnail, and Jemez Mountains salamander.

Some montane species apparently evolved within their current range, adapting to their local environment, such as the Mount Lyell shrew. However, it has also been noted that some isolated mountain ecosystems have a tendency to lose species over time, perhaps because small, insularized populations are vulnerable to the forces of extinction, and the isolation of the habitat reduces the possibility of colonization by new species. Furthermore, some species, such as the grizzly bear, require a range of habitats. These bears historically made use of the forests and meadows found in the Madrean sky islands, as well as lower-elevation habitats such as riparian zones. (Grizzlies were extirpated from the region in the 20th century.) Seasonal movements between highland and lowland habitats can be a kind of migration, such as that undertaken by the mountain quail of the Great Basin mountains. These birds live in high elevations when free of snow, and instead of migrating south for the winter, they migrate down.

Confusing the matter somewhat is the potential for an archipelago of sky islands or even the valleys between them to act not only as a barrier to biological dispersal, but also as a path for migration. Examples of birds and mammals making use of the Madrean archipelago to extend their ranges northward are the elegant trogon and white-nosed coati.

All content from Kiddle encyclopedia articles (including the article images and facts) can be freely used under Attribution-ShareAlike license, unless stated otherwise. Cite this article:
Sky island Facts for Kids. Kiddle Encyclopedia.