Sonora is a Mexian state, in the northwestern Mexico region. Sonora borders the states of Chihuahua to the east, Sinaloa to the south, and Baja California to the northwest. To the north Sonora accounts for a long stretch of the U.S.-Mexico border adjacent to the U.S. states of Arizona and New Mexico; to the west it borders the Gulf of California (Sea of Cortez).

There are various explanations as to the origin of the word Sonora. Here, we will tell you some of the most widely accepted versions. One of these says that when the Spaniards arrived in the lands occupied by the Opata people, they built a chapel and painted an image of the Virgin on a buffalo skin. Over time, when the Opatas began to worship the Virgin, they used to call her Senora instead of the Spanish word Señora (Our Lady). Finally, it would seem that this word became Sonora as we know it today.

Another version has it that Sonora is derived from the Opata word, sonotl which means corn leaf. A legend speaks of an indigenous group that lived near the village of Huépac, and who used corn leaves to cover the walls and roofs of their huts. Yet another version insists that the word comes from the name of a tribe that lived on the banks of the Sonora River; these people were known as the Sonora Indians. This river crosses a large part of the state. It is also useful to understand that, just as Mexico has its national emblems, so the state of Sonora has its own coat-of-arms. 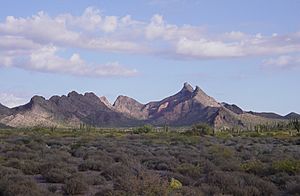 Sonora is located in northwest Mexico. It has a territory of 184,934 square kilometres (71,403 sq mi) and is the second largest state of the country. It borders the states of Sinaloa, Chihuahua, and Baja California Norte, with the United States to its north and the Gulf of California to its west. Its border with the United States is 588 kilometres (365 mi) long. The state is divided into five hydraulic regions – Río Colorado, Sonora Norte, Sonora Sur, Sinaloa, Cuencas Cerradas del Norte.

The state's geography is divided into three regions created by the rise of the Sierra Madre Occidental mountains and the separation of the Baja California Peninsula, with all three running roughly north-south. The mountains dominate eastern Sonora, while the center is dominated by plains and rolling hills, which then extend west to the coast on the Gulf of California. 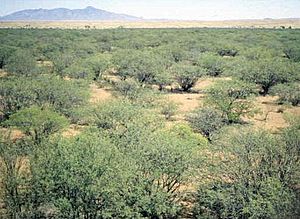 The center plains and coastline were both created by the tearing away of the Baja California Peninsula between ten and twelve million years ago. These plains are between 50 kilometres (31 mi) and 120 kilometres (75 mi) wide, wedged between the Sierra Madre and the Gulf of California, which began to form between 5.5 and 6 million years ago. Climate patterns bring moisture east from the Pacific Ocean, forming rivers and streams that cross the plains area and empty into the gulf. These rivers have brought down sediment from the volcanic rock of the Sierra Madre and eventually buried most of the mountains and hills of the center of the state, smoothing them into plains. These soils are rich in clays and thousands of feet thick in places, making this region very fertile, only lacking water.

The state has 816 kilometres (507 mi) of coastline, all of which faces the Gulf of California, with its relatively shallow and very calm waters. There are beaches along most of this coastline, some of which with fine, white sand. The best known of these are San Carlos, Puerto Peñasco and Bahía Kino. San Carlos, with its Los Algodones Beach is one of the most visited areas on the Sonoran coast. Los Algodones ("The Cottons") is named for its dunes of white sand, which can be compared to cotton balls. San Carlos has a large variety of sea life off its shores, making it popular for sports fishing and scuba diving. A number of Yaquis, Seris and Guaymas on and around the Tetakawi Hill, making a living from fishing. 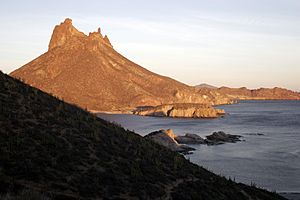 Puerto Peñasco is located in the extreme northwest of the state in the Upper Gulf somewhat near where the Colorado River empties. It contains 110 kilometres (68 mi) of beaches on calm seas, located in the Altar Desert near El Pinacate biosphere reserve, with some of the driest climates in Mexico. Since the 1990s, it has experienced large-scale development along its 110 kilometres (68 mi) of beaches, which have calm seas. The area has experienced a building boom since the 2000s. However, as of late 2013, many buildings are vacant, for sale, or neglected due to the suppressed economic conditions and the corresponding decline in tourism.

Bahía Kino is located near San Carlos, with a dock located in the community of Kino Viejo. This bay's beaches have white sand, with warm calm waters off of them. For this reason, Bahía Viejo calls itself la perla del Mar de Cortés ("the pearl of the Gulf of California"). The area is popular for scuba diving and sports fishing as its waters are filled with various species of multicolored fish, small invertebrates, large crustaceans, manta rays, sponges and turtles. On the neighboring islands, sea lions can be seen. Off this coast is the Isla Tiburón, Mexico's largest island and a nature reserve with wild sheep and deer. There are indigenous communities here, especially at Punta Chueca, which still practice hunting, fishing and collecting natural resources, as well as selling crafts to tourists.

Lesser known beaches include El Desemboque, El Himalaya and Huatabampito. El Desemboque is a small Seri village with beaches located 370 kilometres (230 mi) northwest of Hermosillo, just south of Puerto Libertad. Activities in the area include scuba diving and swimming in isolated and relatively undeveloped beaches. The current name is from Spanish (disembarkation point), but the Seri name for the area means "where there are clams." El Himalaya Beach is located forty km from Guaymas. It is a semi virgin beach surrounded by calm waters, mountains, and unusual species of flora and fauna and cave paintings. The area is filled with large stone yellow-red rock formations that were created by a volcanic eruption. Huatabampito is an area of beaches in the south of the state. The beaches have delicate dune of fine sand and the waters are clear with a green-blue color. Each year, whales arrive to this area to reproduce in the warm waters. This is the main attraction, bringing visitors from Mexico and abroad.

The east of the state is dominated by the Sierra Madre Occidental, which has less extreme temperatures and, due to the high altitude, relatively more rainfall. As moist air masses move inland from the Pacific and the tropics and are forced against the mountains, they cool and this leads to precipitation, mostly rain but occasional snows in the highest regions. This process takes most of the moisture out of the air and feeds the various rivers and streams, which empty into Gulf as well as underground aquifers that are under the coastal plain.

Habitats and vegetation vary greatly depending on elevation and rainfall. An estimated 2,230,000 hectares (22,300 km2; 8,600 sq mi) of Sonora is in arid grasslands; 1,200,000 hectares (12,000 km2; 4,600 sq mi) are covered in forests, 301,859 hectares (3,018.59 km2; 1,165.48 sq mi) in rainforest and 1,088,541 hectares (10,885.41 km2; 4,202.88 sq mi) in farmland. Seventy percent of the territory, or 13,500,000 hectares (135,000 km2; 52,000 sq mi), is covered in desert vegetation or arid grasslands. The Yécora municipality in eastern Sonora has one of the highest grass diversities in Mexico. There are eight types of desert vegetation, seven of which are native to the Sonora Desert and one in the area that transitions to the Chihuahua Desert. Most are scrubs or small bushes, which generally do not reach over 4 metres (13 ft) in height, most of the rest are cactus, with some mangroves and other halophile plants. Many plants are rainfall sensitive, with most trees and shrubs growing leaves and flowers just before or during the rainy season, then drop their leaves afterwards. However, there are plants in flower at one time or another throughout the year. Coastal plants receive less water stress due to lower evaporation rates, and substantial moisture from dew, especially in the cooler months. 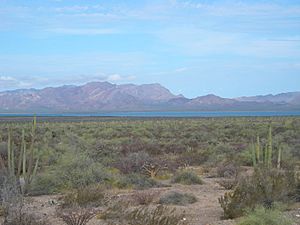 View of Isla Tiburón across the Infiernillo Channel

Most forests are located in the northeast of the state, covering about 6.4% of the state. This is the area with the coolest temperatures. Deforestation has been a significant problem, especially after 1980, because the rate of cutting trees has increased. In central Sonora, the area covered by Madrean evergreen woodland and Sonoran Desert scrub decreased 28% and 31%, respectively, between 1973 and 1992 (ValdezZamudio et al. 2000). During this same period, For example, much of the forests of mesquite trees in the lower elevations of the state have disappeared because of the demand for local fuels and the market for mesquite charcoal in Mexico and the United States

Most of northern Mexico suffers from one of the world's highest rates of desertification due to land degradation in arid and semi arid areas, with the loss of biological and/or economic productivity, but the process is most severe Sonora as neighboring Sinaloa. Land degradation occurs because of clearing land for agriculture, the planting of non-native buffelgrass for grazing, the cutting of forests, overgrazing of natural vegetation and soil salinization from irrigation. A study by Balling in 1998 showed higher soil and air temperatures in areas that have been overgrazed, deforested and otherwise cleared land, likely due to the lack of shading vegetation, which leads to higher soil evaporation and desert conditions. Studies have also indicated that warming trends are higher in Sonora than in neighboring Arizona, into which the Sonora Desert also extends.

The state contains 139 species and subspecies of native mammals, with the most important being white tailed deer, mule deer, wild sheep, bats, hares, squirrels, moles, beavers, coyotes, wolves, foxes, jaguars, and mountain lions. Amphibians and reptiles include frogs and toads, desert tortoises, chameleons, gila monsters, rattlesnakes and other types of snakes. The number of bird species native to the state is not known, but major species include roadrunners, quail, turkeys, buzzards and doves.

All content from Kiddle encyclopedia articles (including the article images and facts) can be freely used under Attribution-ShareAlike license, unless stated otherwise. Cite this article:
Sonora Facts for Kids. Kiddle Encyclopedia.