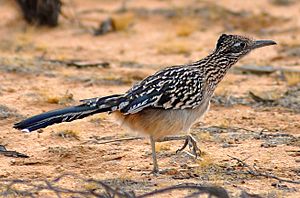 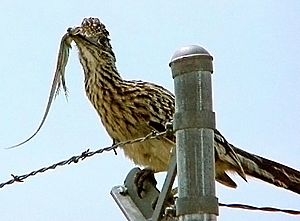 Greater roadrunner with a lizard 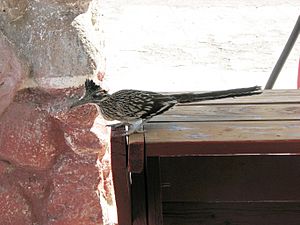 Greater roadrunners often become habituated to the presence of people.

The roadrunner is a large, slender, black-brown and white streaked ground bird which has an average weight of 8 to 15 ounces, and is about 18 inches (46 cm) to 22 inches (56 cm) from tail to beak. It has long legs, strong feet, and a big dark beak. The roadrunner is terrestrial (lives on land). Even though it can fly, it spends most of its time on the ground. When they fly their wings are short and rounded and have a white crescent on the feathers. Roadrunners and other members of the cuckoo family have zygodactyl feet (two toes on the front and two toes on the back). Roadrunners can run up to the speed of 20 miles per hour (32 km per hour). They fly to escape predators.

Roadrunners live in deserts of the southwestern U.S.A, Mexico and Central America.

Roadrunners are omnivores, meaning they eat both meat and plants. They eat insects like grasshoppers, crickets, beetles, and caterpillars, small reptiles like lizards and snakes, rodents and other small mammals. They also eat tarantulas and other spiders, scorpions, centipedes, snails, small birds and eggs. The plants they eat are fruits and seeds like prickly pear cactus and sumac. Roadrunners search on the ground to find food. They usually run after their prey but also sometimes may leap to catch insects. Because of its fast speed, the roadrunner is one of the few animals that preys upon the rattlesnake. The roadrunner is the only real predator of the tarantula hawk .

The nest of roadrunner is made up of mainly sticks and sometimes leaves, and snake skin. A nest usually contains 2-6 eggs which are white colored. Roadrunners have bi-parental care. Both parents take care of the nest and feed the hatchlings, but males take care of the nest at night and females at day. For the first 1 to 2 weeks after the young hatch, one parent always remains at the nest. After the hatchlings are 2 to 3 weeks old they leave and never return to the nest.

All content from Kiddle encyclopedia articles (including the article images and facts) can be freely used under Attribution-ShareAlike license, unless stated otherwise. Cite this article:
Roadrunner Facts for Kids. Kiddle Encyclopedia.