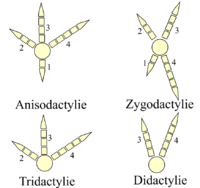 Bird feet are adapted to the life they lead, and the patterns are often use in avian classification. They are derived from the basic limb of ancestral tetrapods, the pentadactyl limb. Humans (and other primates) have the original five fingers and five toes. Birds have no more than four toes, inherited together with over a hundred anatomical features from theropod dinosaurs. These four toes are arranged into four main patterns.

Parts of the leg

The scales of birds are made of the same keratin as beaks, claws, and spurs. They are found on the toes and sometimes further up on the ankle. The scales and scutes of birds are thought to be homologous with those of reptiles, and feathers have developed from the scales of Archosaurs.

All content from Kiddle encyclopedia articles (including the article images and facts) can be freely used under Attribution-ShareAlike license, unless stated otherwise. Cite this article:
Bird feet Facts for Kids. Kiddle Encyclopedia.