Adaptation is the evolutionary process where an organism becomes better suited to its habitat. This process takes place over many generations. It is one of the basic phenomena of biology.

When people speak about adaptation, they often mean a 'feature' (a trait) which helps an animal or plant survive. An example is the adaptation of horses' teeth to grinding grass. Grass is their usual food; it wears the teeth down, but horses' teeth continue to grow during life. Horses also have adapted to run fast, which helps them to escape their predators, such as lions. These features are the product of the process of adaptation.

The illustration of bird beaks shows an obvious sign of their different ways of life. However, eating a different food also means having a different digestive system, gut, claws, wings and above all, different inherited behaviour. For the major adaptations, what changes is not a single trait, but a whole group of features.

Adaptation occurs because the better adapted animals are the most likely to survive, and to reproduce successfully. This process is known as natural selection; it is the basic cause of evolutionary change. 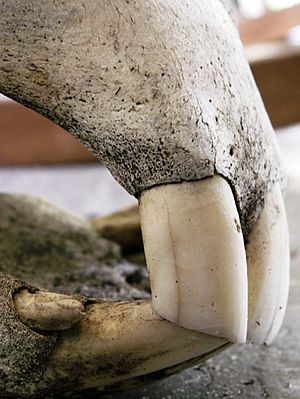 All adaptations help organisms survive in their ecological niches (environments). This implies an increase in biological fitness.

These adaptive traits may be structural, behavioural or physiological. Structural adaptations are physical features of an organism (shape, body covering, armament; and also the internal organization). 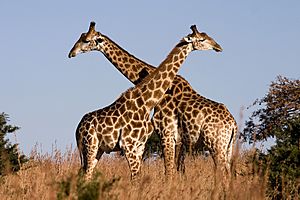 The long neck of a giraffe brings benefits but at a cost, the cost is that a long neck is heavy and adds to the animal's body mass, requiring additional energy to build the neck and to carry its weight around

Physiological adaptations permit the organism to perform special functions, for instance, making venom, secreting slime, phototropism; and also more general functions such as growth and development, temperature regulation, ionic balance and other aspects of homeostasis. Adaptation, then, affects all aspects of the life of an organism.

Important adaptations do not come singly. They come in groups, which work together to make the animal or plant successful in its particular niche or life-style. 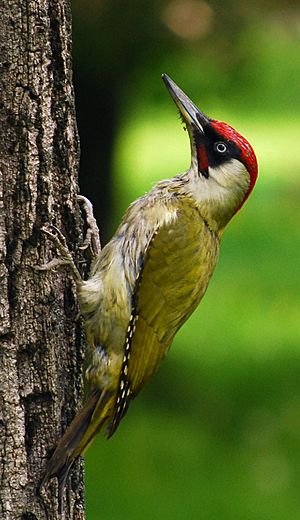 Green woodpecker: note the beak, the feet and the tail

Woodpecker adaptations are a good example of how a whole group of features are needed for a successful way of life;

Woodpeckers have a special hyoid bone, which reaches from their beak, loops over top of the skull to completely surround their brains. This acts to keep the brain in place. It is the movement of the brain inside the skull during impact, more than the blow itself, that causes concussions. If the brain is held in place, injury risks are greatly reduced. 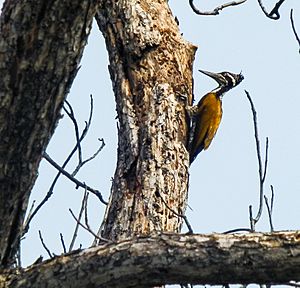 Ancestral woodpeckers, which switched to climbing on tree trunks, had ancestral foot and tail structure. This suggests that a change in behaviour, perhaps to get at a better food source, was one of the first things that happened in the chain of events. The way evolutionary changes start is an important topic.

Traits with no function 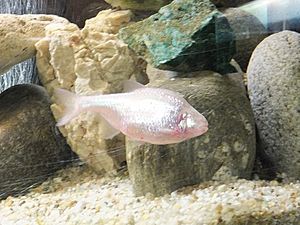 Not all features of an organism are adaptations. It may need field investigations or experiments to find out whether it has a function in the life of the species.

Adaptations tend to reflect the past life of a species. If a species has recently changed its life style, a once valuable adaptation may become function-less in the course of evolution. Animals which live in dark caves often lose, over a long period, their colors and eyesight.

The reasons for this may vary. The loss of structure and function may be a positive adaptation which saves energy and materials. But it may be simply a by-product of genes selected for other functions (pleiotropy). Or the structure may be linked in development, and affected by selection for some other structure.

It is a general rule that any adaptations which are no longer useful either become vestigial organs (see vermiform appendix), or may be selected and adapted to other functions (see ear ossicles). 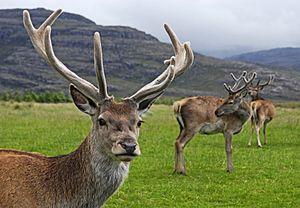 Many adaptations serve more than one function. This is often the reason some traits become so noticeable that they almost define the species concerned.

The legs of a horse are also a main defence: a horse's kick is very destructive. The antlers of male deer serve a sexual function as well as a defence against predators.

Man's large brain serves not only for language, but also for thinking and problem-solving.

Bird feathers are not just used to fly; they are the basis of its heat conservation, temperature regulation and signalling.

Compromise and conflict between adaptations 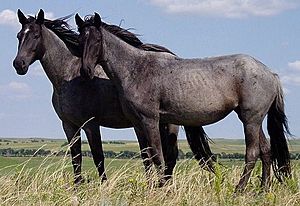 Adaptations are never perfect. There are always trade-offs between the various functions and structures in a body. It is the organism as a whole which lives and reproduces, therefore it is the complete set of adaptations which gets passed on to future generations.

All adaptations have a downside: horse legs are great for running on grass, but they cannot scratch their backs; mammals' hair helps temperature regulation, but offers a niche for ectoparasites. Compromise and makeshift occur widely, not perfection. Selection pressures pull in different directions, and the adaptation that results is some kind of compromise.

Change of function over time 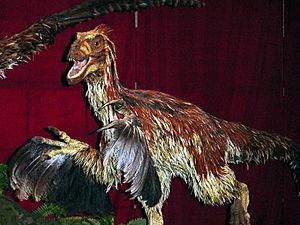 Some dinosaurs evolved feathers for thermo-insulation and display

The function of a trait can, and often does, change over time. Several terms have been used to describe this: preadaptation, exaptation, cooption. 'Preadaptation' is the most common term used when a preexisting structure or trait inherited from an ancestor evolves a different function.

One example of preadaptation is in dinosaurs, which evolved feathers with the function of thermo-insulation and display long before they were used for flight by early birds. 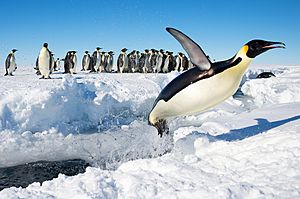 Penguin jumping out of the water

The wings of penguins. Once used for flying, they are now used for 'flying' under water.

Change of function in organs and structures is extremely common in evolution. 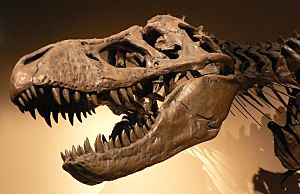 The following definitions are mainly due to Theodosius Dobzhansky;

All content from Kiddle encyclopedia articles (including the article images and facts) can be freely used under Attribution-ShareAlike license, unless stated otherwise. Cite this article:
Adaptation Facts for Kids. Kiddle Encyclopedia.