Opossums are the largest order of marsupials in the Western Hemisphere, the Didelphimorphia.

They are often called possums, though that term is more properly applied to Australian fauna of the suborder Phalangeriformes.

The Virginia Opossum was the first animal to be named an opossum: the word comes from the Algonquian language, and means "white beast". It was one of the few South American marsupials to establish itself permanently in North America after the Great American Interchange, and the only one to survive there today. 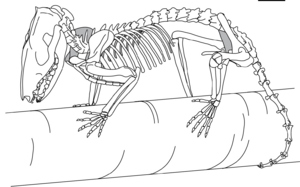 Didelphimorphs are small to medium-sized marsupials that grow to the size of a house cat. They tend to be semi-arboreal omnivores, although there are many exceptions. Most members of this taxon have long snouts, a narrow braincase, and a prominent sagittal crest.

Didelphimorphs have a plantigrade stance (feet flat on the ground) and the hind feet have an opposable digit with no claw. Like some New World monkeys, opossums have prehensile tails. Like that of all marsupials, the fur consists of awn hair only, and the females have a pouch. The tail and parts of the feet bear scutes. The stomach is simple, with a small cecum. Like most marsupials, the male opossum has a forked penis bearing twin glandes.

Although all living opossums are essentially opportunistic omnivores, different species vary in the amount of meat and vegetation they include in their diet. Members of the Caluromyinae are essentially frugivorous; whereas the lutrine opossum and Patagonian opossum primarily feed on other animals. The yapok (Chironectes minimus) is particularly unusual, as it is the only living semi-aquatic marsupial, using its webbed hindlimbs to dive in search of freshwater mollusks and crayfish. 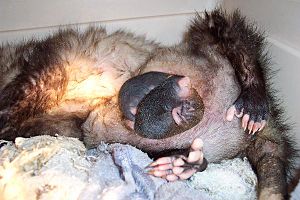 Sleeping Virginia opossum with babies in her relaxed pouch

Once born, the offspring must find their way into the marsupium to hold on to and nurse from a teat. Baby opossums, like their Australian cousins, are called joeys. Female opossums often give birth to very large numbers of young, most of which fail to attach to a teat, although as many as thirteen young can attach, and therefore survive, depending on species. The young are weaned between 70 and 125 days, when they detach from the teat and leave the pouch. The opossum lifespan is unusually short for a mammal of its size, usually only one to two years in the wild and as long as four or more years in captivity. Senescence is rapid.

The males usually being slightly larger, much heavier, and having larger canines than females. 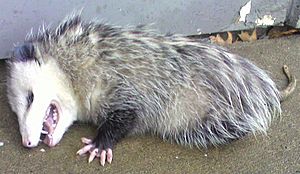 Opossums are usually solitary and nomadic, staying in one area as long as food and water are easily available. Some families will group together in ready-made burrows or even under houses. Though they will temporarily occupy abandoned burrows, they do not dig or put much effort into building their own. As nocturnal animals, they favor dark, secure areas. These areas may be below ground or above. 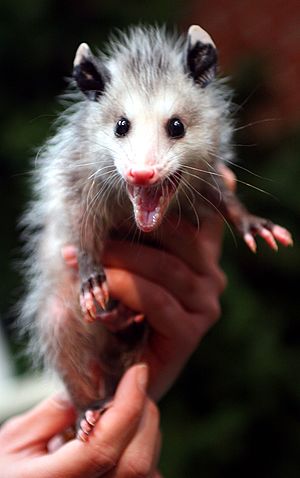 When threatened or harmed, they will "play possum", mimicking the appearance and smell of a sick or dead animal. This physiological response is involuntary (like fainting), rather than a conscious act. In the case of baby opossums, however, the brain does not always react this way at the appropriate moment, and therefore they often fail to "play dead" when threatened. When an opossum is "playing possum", the animal's lips are drawn back, the teeth are bared, saliva foams around the mouth, the eyes close or half-close, and a foul-smelling fluid is secreted from the anal glands. The stiff, curled form can be prodded, turned over, and even carried away without reaction. The animal will typically regain consciousness after a period of a few minutes to four hours, a process that begins with slight twitching of the ears.

Some species of opossums have prehensile tails, although dangling by the tail is more common among juveniles. An opossum may also use its tail as a brace and a fifth limb when climbing. The tail is occasionally used as a grip to carry bunches of leaves or bedding materials to the nest. A mother will sometimes carry her young upon her back, where they will cling tightly even when she is climbing or running.

Threatened opossums (especially males) will growl deeply, raising their pitch as the threat becomes more urgent. Males make a clicking "smack" noise out of the side of their mouths as they wander in search of a mate, and females will sometimes repeat the sound in return. When separated or distressed, baby opossums will make a sneezing noise to signal their mother. The mother in return makes the clicking sound and waits for the baby to find her. If threatened, the baby will open its mouth and quietly hiss until the threat is gone.

Opossums are found in North, Central, and South America. The Virginia opossum lives in regions as far north as Canada and as far south as Central America, while other types of opossums only inhabit countries south of the United States. The Virginia opossum can often be found in wooded areas, though its habitat may vary widely. Opossums have been moving north in recent years, likely due to climate change.

The Virginia opossum was once widely hunted and consumed in the United States. Opossum farms have been operated in the United States in the past. Sweet potatoes were eaten together with the possum in America's southern area. South Carolina cuisine includes opossum, and President Jimmy Carter hunted opossums in addition to other small game. Raccoon, opossum, partridges, prairie hen, and frogs were among the fare Mark Twain recorded as part of American cuisine. 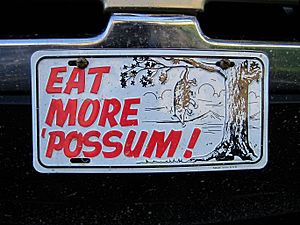 In Dominica, Grenada, Trinidad, Saint Lucia and Saint Vincent and the Grenadines the common opossum or manicou is popular and can only be hunted during certain times of the year owing to overhunting.

The meat is traditionally prepared by smoking, then stewing. It is light and fine-grained, but the musk glands must be removed as part of preparation. The meat can be used in place of rabbit and chicken in recipes. Historically, hunters in the Caribbean would place a barrel with fresh or rotten fruit to attract opossums that would feed on the fruit or insects.

In northern/central Mexico, opossums are known as "tlacuache" or "tlacuatzin". Their tails are eaten as a folk remedy to improve fertility. In the Yucatán peninsula they are known in the Yucatec Mayan language as "och" and they are not considered part of the regular diet by Mayan people, but still considered edible in times of famine.

Opossum oil (possum grease) is high in essential fatty acids and has been used as a chest rub and a carrier for arthritis remedies given as topical salves.

Opossum pelts have long been part of the fur trade.

All content from Kiddle encyclopedia articles (including the article images and facts) can be freely used under Attribution-ShareAlike license, unless stated otherwise. Cite this article:
Opossum Facts for Kids. Kiddle Encyclopedia.