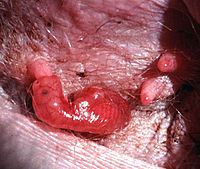 A young baby kangaroo in its pouch.

Marsupials are the main part of an infraclass of mammals called the Metatheria. This consists of the marsupials and their extinct ancestors.

Marsupials have a special pouch where they carry their babies. After the birth the baby goes into its mother's pouch, where it can drink milk and is kept warm and safe. When the babies are young they stay in the pouch all the time, but when they are older they can leave it for short times. When they are old enough and too big for the pouch they do not go into their mother's pouch anymore.

They were outcompeted on Laurasia by placental mammals, but the placentals did not get into the Australasian part of Gondwana before it broke away into a separate supercontinent. That is why marsupials now found native only on the southern continents of Australasia and South and Central America, with the single exception of the Virginia Opossum.

Some of the 100 living species of South American marsupials have migrated north: 13 species to Central America and one to North America.

There are 334 species of living Australasian marsupials. They are mostly in Australia and New Guinea, and some are on the smaller islands.

In more recent times the land bridge between the Americas, and reintroductions to Australia, have brought in placental mammals. They have caused the recent extinction of many marsupial species.

Comprising over 300 extant species, several attempts have been made to accurately interpret the phylogenetic relationships among the different marsupial orders. Studies differ on whether Didelphimorphia or Paucituberculata is the sister group to all other marsupials. Though the order Microbiotheria (which has only one species, the monito del monte) is found in South America, morphological similarities suggest it is closely related to Australian marsupials. Molecular analyses in 2010 and 2011 identified Microbiotheria as the sister group to all Australian marsupials. However, the relations among the four Australidelphid orders are not as well understood. The cladogram below, depicting the relationships among the various marsupial orders, is based on a 2015 phylogenetic study.

DNA evidence supports a South American origin for marsupials, with Australian marsupials arising from a single Gondwanan migration of marsupials from South America to Australia. There are many small arboreal species in each group. The term "opossum" is used to refer to American species (though "possum" is a common diminutive), while similar Australian species are properly called "possums". 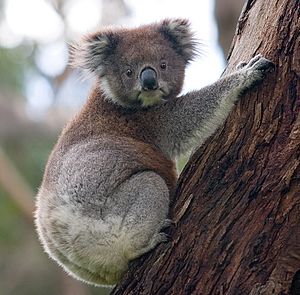 Marsupials have the typical characteristics of mammals—e.g., mammary glands, three middle ear bones, and true hair. There are, however, striking differences as well as a number of anatomical features that separate them from Eutherians.

In addition to the front pouch, which contains multiple nipples for the protection and sustenance of their young, marsupials have other common structural features. Ossified patellae are absent in most modern marsupials (though a small number of exceptions are reported) and epipubic bones are present. Marsupials (and monotremes) also lack a gross communication (corpus callosum) between the right and left brain hemispheres.

The skull has peculiarities in comparison to placental mammals. In general, the skull is relatively small and tight. Holes (foramen lacrimale) are located in the front of the orbit. The cheekbone is enlarged and extends further to the rear. The angular extension (processus angularis) of the lower jaw is bent toward the center. Another feature is the hard palate which, in contrast to the placental mammals' foramina, always have more openings. The teeth differ from that of placental mammals, so that all taxa except wombats have a different number of incisors in the upper and lower jaws. The early marsupials had a dental formula from 5 / 4-1 / 1-3 / 3-4 / 4, that is, per pine half; they have five maxilla or four mandibular incisors, one canine, three premolars and four molars, for a total of 50 teeth. Some taxa, such as the opossum, have the original number of teeth. In other groups the number of teeth is reduced. Marsupials in many cases have 40 to 50 teeth, significantly more than placental mammals. The upper jaw has a high number of incisors, up to ten, and they have more molars than premolars. The second set of teeth grows in only at the 3rd premolar: all remaining teeth are already created as permanent teeth.

Few general characteristics describe their skeleton. In addition to details in the construction of the ankle, bones (Ossa epubica) are characteristic, two from the pubic bone of the pelvis, which is a forwardly projecting bone. Since these are present in males and pouchless species, it is believed that they originally had nothing to do with reproduction, but served in the muscular approach to the movement of the hind limbs. This could be explained by an original feature of mammals, as these epipubic bones are also found in monotremes. Marsupial reproductive organs differ from the placentalp mammals. For them, the reproductive tract is doubled. The females have two uteri and two vaginas, and before birth, a birth canal forms between them, the median vagina. The males have a split or double penis lying in front of the scrotum.

A pouch is present in most, but not all, species. Many marsupials have a permanent bag, whereas in others the pouch develops during gestation, as with the shrew opossum, where the young are hidden only by skin folds or in the fur of the mother. The arrangement of the pouch is variable to allow the offspring to receive maximum protection. Locomotive kangaroos have a pouch opening at the front, while many others that walk or climb on all fours have the opening in the back. Usually, only females have a pouch, but the male water opossum has a pouch that is used to accommodate his genitalia while swimming or running. 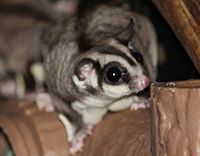 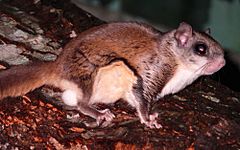 The sugar glider, a marsupial, (left) and flying squirrel, a rodent, (right) are examples of convergent evolution.

Marsupials have adapted to many habitats, reflected in the wide variety in their build. The largest living marsupial, the red kangaroo, grows up to 1.8 metres (5.9 ft) in height and 90 kilograms (200 lb) in weight, but extinct genera, such as Diprotodon, were significantly larger and heavier. The smallest members of this group are the marsupial mice, which often reach only 5 centimetres (2.0 in) in body length.

Some species resemble placental mammals and are examples of convergent evolution. The extinct Thylacine strongly resembled the placental wolf, hence its nickname "Tasmanian wolf". Flying and the associated ability to glide occurred both with marsupials (as with sugar gliders) and some placental mammals (as with flying squirrels), which developed independently. Other groups such as the kangaroo, however, do not have clear placental counterparts, though they share similarities in lifestyle and ecological niches with ruminants.

An infant marsupial is known as a joey. Marsupials have a very short gestation period (about four to five weeks), and the joey is born in an essentially fetal state. The blind, furless, miniature newborn, the size of a jelly bean, crawls across its mother's fur to make its way into the pouch, where it latches onto a teat for food. It will not re-emerge for several months, during which time it develops fully. After this period, the joey begins to spend increasing lengths of time out of the pouch, feeding and learning survival skills. However, it returns to the pouch to sleep, and if danger threatens, it will seek refuge in its mother's pouch for safety.

Joeys stay in the pouch for up to a year in some species, or until the next joey is born. A marsupial joey is unable to regulate its own body temperature and relies upon an external heat source. Until the joey is well-furred and old enough to leave the pouch, a pouch temperature of 30–32 °C (86–90 °F) must be constantly maintained.

Joeys are born with "oral shields". In species without pouches or with rudimentary pouches these are more developed than in forms with well-developed pouches, implying a role in maintaining the young attached to the mother's nipple. 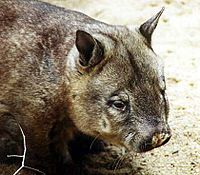 The extinct genus Yalkaparidon (Order Yalkaparidontia) is a bizarre fossil found in the Oligocene/Miocene deposits of Riversleigh, NE Australia. Its teeth are so strange that palaeontologists call it a 'Thingodont'. 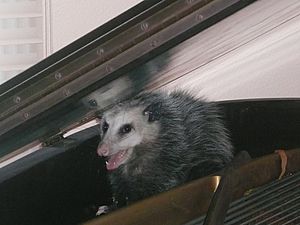 A Virginia opossum inhabiting a piano in Houston, Texas, shortly before its release

The borhyaenids and the sabertooth Thylacosmilus are no longer considered to be marsupials. They are sparassodont metatherians, the sister group of the marsupials.

All content from Kiddle encyclopedia articles (including the article images and facts) can be freely used under Attribution-ShareAlike license, unless stated otherwise. Cite this article:
Marsupial Facts for Kids. Kiddle Encyclopedia.