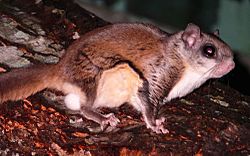 Flying squirrels are a tribe of 44 species in the squirrel family Sciuridae.

They are sociable, noisy rodents that glide from tree to tree, using a flap of loose skin that connects their front and hind legs. They can glide up to 150 feet (46 m), steering with their tail, and landing on tree trunks, gripping it with all four feet.

These squirrels are nocturnal (most active at night). They have a life span of about five years in the wild, and about 13 years in captivity. Flying squirrels live in forests in North America, Europe and Asia. 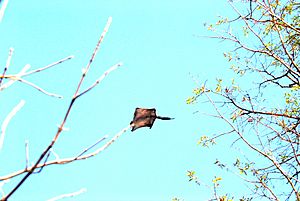 Flying squirrels are usually nocturnal, since they are not adept at escaping birds of prey that hunt during the daytime. They eat according to their environment; they are omnivorous, and will eat whatever food they can find. The North American southern flying squirrel eats seeds, insects, gastropods (slugs and snails), spiders, shrubs, flowers, fungi, and tree sap.

The mating season for flying squirrels is during February and March. When the infants are born, the female squirrels live with them in maternal nest sites. The mothers nurture and protect them until they leave the nest. The males do not participate in nurturing their offspring.

At birth, flying squirrels are mostly hairless, apart from their whiskers, and most of their senses are not present. Their internal organs are visible through the skin, and their sex can be signified. By week five, they are almost fully developed. At that point, they can respond to their environment and start to develop a mind of their own. Through the upcoming weeks of their lives, they practice leaping and gliding. After two and a half months, their gliding skills are perfected, they are ready to leave the nest, and are capable of independent survival.

Flying squirrels can easily forage for food in the night, given their highly developed sense of smell. They harvest fruits, nuts, fungi, and birds' eggs. Gliding conserves energy. Many gliders have specialized diets and there is evidence to believe that gliders may be able to take advantage of scattered protein deficient food. Additionally, gliding is a fast form of locomotion and by reducing travel time between patches, they can increase the amount of foraging time.

All content from Kiddle encyclopedia articles (including the article images and facts) can be freely used under Attribution-ShareAlike license, unless stated otherwise. Cite this article:
Flying squirrel Facts for Kids. Kiddle Encyclopedia.