The northern flying squirrel (Glaucomys sabrinus) is one of three species of the genus Glaucomys, the only flying squirrels found in North America. They are found in coniferous and mixed coniferous forests across much of Canada, from Alaska to Nova Scotia, and south to the mountains of North Carolina and west to Utah in the United States. They are light brown with pale underparts and grow to a length of 25 to 37 cm (10 to 15 in). They are proficient gliders but uncoordinated walkers on the ground. They feed on a variety of plant material as well as tree sap, fungi, insects, carrion, bird eggs and nestlings. They mostly breed once a year in a cavity lined with lichen or other soft material. Except when they have young, they change nests frequently, and in winter a number of individuals may huddle together in a shared nest. Unlike most members of their family, flying squirrels are strictly nocturnal.

The U.S. Fish and Wildlife Service temporarily put the West Virginia northern flying squirrel back under protection on June 6, 2011 in response to a court order. On appeal, the delisting was reinstated in March 2013.

These nocturnal, arboreal rodents have thick light brown or cinnamon fur on their upper body and greyish fur on the flanks and whitish fur underneath. They have large eyes and a flat tail. They can also be identified by their long whiskers, common to nocturnal mammals. The adult northern flying squirrel measures from 25 to 37 cm long, and their weight can range from 110 to 230 grams. 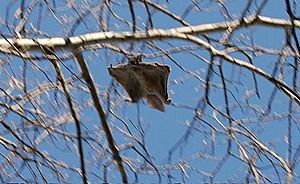 Flying squirrels do not actually fly, they glide using a patagium created by a fold of skin. From atop trees, flying squirrels can initiate glides from a running start or from a stationary position by bringing their limbs under the body, retracting their heads, and then propelling themselves off the tree. It is believed that they use triangulation to estimate the distance of the landing as they often lean out and pivot from side to side before jumping. Once in the air, they form an "X" with their limbs, causing their membrane to stretch into a square-like shape and glide down at angles of 30 to 40 degrees. They maneuver with great efficiency in the air, making 90 degree turns around obstacles if needed. Just before reaching a tree, they raise their flattened tails, which abruptly changes their trajectory upwards, and point all of their limbs forward to create a parachute effect with the membrane to reduce the shock of landing. The limbs absorb the remainder of the impact, and the squirrels immediately run to the other side of the trunk or to the top of the tree to avoid any potential predators. Although graceful in flight, they are very clumsy walkers and if they happen to be on the ground in the presence of danger, they will prefer to hide rather than attempt to escape.

A major food source for the squirrels are fungi of various species, although they also eat lichens, mushrooms, all mast-crop nuts, tree sap, insects, carrion, bird eggs and nestlings, buds and flowers. The squirrels are able to locate truffles by olfaction, though they also seem to use cues such as the presence of coarse woody debris, indicating a decaying log, and spatial memory of locations where truffles were found in the past.

The northern flying squirrel is also known to cache food for when food supplies are lower. These caches can be in cavities in trees, as well as in the squirrels' nest. Lichens and seeds are commonly cached.

The northern flying squirrel also disseminates spores of the fungi that they eat. 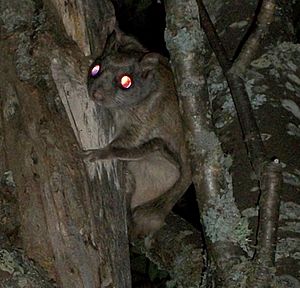 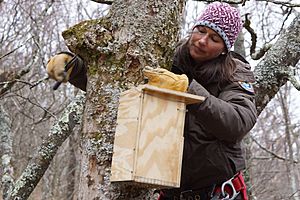 Installation of a new squirrel box off the Blue Ridge Parkway

Northern flying squirrels generally nest in holes in trees, preferring large-diameter trunks and dead trees, and will also build outside leaf nests called dreys and will also nest underground. Tree cavities created by woodpeckers as suitable nest sites tend to be more abundant in old-growth forests, and so do the squirrels, though harvested forests can be managed in ways that are likely to increase squirrel numbers. Except when rearing young, the squirrels shift from nest to nest frequently. They often share nests during winter months, forming aggregations. Usually, aggregate nests contain 4 to 10 individuals. The sharing of nests in winter by northern flying squirrels is important in maintaining body temperature (biothermal regulation), as northern flying squirrels do not hibernate, nor do they enter torpor states.

Northern flying squirrels gliding distances tend to be between 5 and 25 metres, though glides of up to 45 m and longer have been observed. Average glides are about 5 m less for females than for males. Glide angle has been measured at 26.8 degrees and glide ratio at 1.98.

Since first documented by Shaw in 1801, the general understanding was that northern flying squirrels bred but once per year. Recently, in southern Ontario, Canada, polyestrous behaviour (two litters per year) has been documented for the first time. This observation has since been confirmed by a second research team in New Brunswick, Canada.

Northern flying squirrels, along with pine squirrels, are an important prey species for the spotted owl (Strix occidentalis) and eastern screech owl (Megascops asio). Other predators include various other large birds, especially the great horned owl and hawks, as well as mammals including the American marten, the Canadian lynx, the red fox, and the domestic cat.

All content from Kiddle encyclopedia articles (including the article images and facts) can be freely used under Attribution-ShareAlike license, unless stated otherwise. Cite this article:
Northern flying squirrel Facts for Kids. Kiddle Encyclopedia.