The Canada lynx is a species of lynx which lives on the taiga. It is about twice the size of a domestic cat, and eats mice, ground squirrels, and lemming. and young deer. This wild animal is not endangered (except in the southern 48 states of the US). It is of "least concern" (IUCN). Humans hunt them for their beautiful, thick fur.

With a dense silvery-brown coat, ruffed face and tufted ears, the Canada lynx resembles the other species of the mid-sized Lynx genus. It is larger than the bobcat, with which it shares parts of its range, and over twice the size of the domestic cat.

The Canada lynx is a secretive and mostly nocturnal animal, although it may be active at any time of day. They shelter in areas of particularly dense forest. In regions where their range overlaps with that of other predators, such as bobcats and coyotes, they tend to hunt in areas with deeper snow cover, or at higher altitudes. The cat tends to stay within 100 yards (91 m) of the treeline, but does not shy away from swimming. One account records a lynx swimming two miles across the Yukon River.

Although normally solitary, at times small groups may be observed traveling together. The lynx roam about 1.5 to 3 mi (2.4 to 4.8 km) each day, and thus require a large territory. Typical home ranges are between 15 and 50 km2 (5.8 and 19.3 sq mi), but are highly variable, with extremes from 3 to 783 km2 (1.2 to 302.3 sq mi) having been reported. When food becomes scarce, the lynx territory will increase; most of the population will roam far, with a select few staying behind in their original territory.

Like other cats, Canada lynx use scent marking to indicate their territory. Adults typically deposit faeces on top of the snow or on tree stumps and other prominent sites and frequently spray urine to mark their range. They also use visual marks on trees. 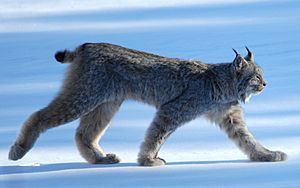 Canada lynx feed predominantly on snowshoe hares, which typically comprise 60% to 97% of their diet; as a result, the size of the lynx population tends to run parallel to the 10 year long rise and decline of hare's numbers. However, especially in summer, they will also eat rodents and birds, and sometimes hunt larger prey such as deer. Like many cats, they will eat carrion when it is available.

Canada lynx use their large ears and eyes to seek out prey. They will hunt every one to two days and consume around 600 to 1,200 g (1.3 to 2.6 lb) of food per day. They hunt both by ambush and by actively seeking out prey, varying their tactics depending on the terrain and relative abundance of prey species. Lynx do not have stamina; whilst they are fast over short distances, they lack the ability to maintain their speed for more than a few dozen feet. If the lynx does not catch its prey within the first few seconds, it will generally give up the chase to conserve energy.

If the lynx kills or scavenges a larger animal that it cannot consume all in one sitting, it will drag it to a hiding area such as a bush or under a rock and then will cover the dead animal with leaves and return to consume it later. Such behavior is particularly common when prey is abundant. If food is scarce and the lynx comes upon a large number of prey, it may go on a spree, killing as many prey as possible, then storing the kills.

Although Canada lynx are typically solitary hunters, females and cubs have been seen to hunt together in coordinated attacks. One lynx will scare the prey out of the hiding place, while the others are ready to attack a short distance away.

Other animals use the lynx to hunt as well. The Great Horned Owl will station itself above the lynx and wait for the lynx to flush the prey out of its hiding place. The owl will then attack and capture the prey before the lynx can get to it.

The Canada lynx is found in northern forests across almost all of Canada and Alaska. It is, however, absent in the relatively treeless regions of the Great Plains and the northern coasts, which are outside the natural range of the snowshoe hare. Due to human activity, the Canada lynx is no longer found in Prince Edward Island or on the mainland of Nova Scotia, although there are two known areas of Canada lynx populations in the Cape Breton Highlands.

In addition there are large populations of this lynx in Montana, Idaho, Washington, and Oregon and a resident population exists in Yellowstone National Park, Wyoming that extends into the Greater Yellowstone Ecosystem. The Canada lynx is rare in Utah, Minnesota, and New England. The Canada lynx is a threatened species in the contiguous United States. It is also found in the Medicine Bow National Forest in Wyoming.

All content from Kiddle encyclopedia articles (including the article images and facts) can be freely used under Attribution-ShareAlike license, unless stated otherwise. Cite this article:
Canada lynx Facts for Kids. Kiddle Encyclopedia.