Bobcat (Lynx rufus) are fierce cats that live in forests, swamps, mountains, prairie, and deserts in much of North America. Bobcats are generally nocturnal (most active at night), but are most active at dawn and dusk. They spend the day in their den (a cave, hollow log or rock crevice). They are very good climbers and swimmers. Bobcats are eaten by cougars, coyotes, wolves, and owls. Bobcats usually live from 10 to 14 years. Bobcats and lynxes are closely related. 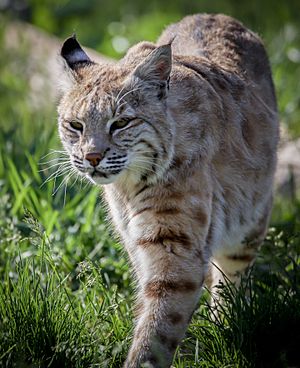 The Bobcat has powerful jaws and long, pointed canine teeth. It has sharp, retractable claws, big short ears, and a spotted coat. Many bobcats have long tufts of hair at the tip of the ears that improve the cat's hearing. The brown eyes have round pupils. These graceful cats are from 24 to 40 inches (60–100 cm) long (including the tail). The stubby tail is only 4 to 7 inches (10–18 cm) long, and looks as though it was cut off (or bobbed). This is what this cat is named for. They are nocturnal (active at night) and elusive so they are rarely seen by humans. 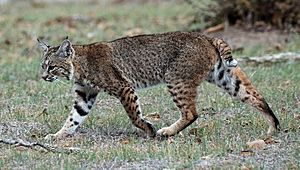 Bobcat activities are confined to well-defined territories, which vary in size depending the distribution of prey. The home range is marked with feces, urine scent, and by clawing prominent trees in the area. In its territory, the bobcat has numerous places of shelter, usually a main den, and several auxiliary shelters on the outer extent of its range, such as hollow logs, brush piles, thickets, or under rock ledges. Its den smells strongly of the bobcat.

Like most felines, the bobcat is largely solitary, but ranges often overlap. Unusual for cats, males are more tolerant of overlap, while females rarely wander into others' ranges. Given their smaller range sizes, two or more females may reside within a male's home range. When multiple territories overlap, a dominance hierarchy is often established, resulting in the exclusion of some transients from favored areas. 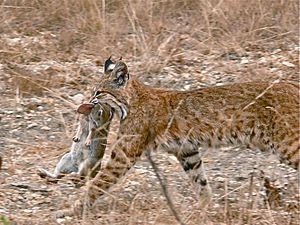 The bobcat is able to survive for long periods without food, but eats heavily when prey is abundant. During lean periods, it often preys on larger animals, which it can kill and return to feed later. The bobcat hunts by stalking its prey and then ambushing with a short chase or pounce. Its preference is for mammals weighing about 1.5 to 12.5 lb (0.68 to 5.67 kg). Its main prey varies by region.

Bobcats are carnivores (meat-eaters). These fast, solitary hunters eat small mammals (like rabbits, hares, rodents, foxes, weasels, and even the occasional small deer), birds, fish, and eggs. Bobcats stalk their prey, and then pounce onto it. They can leap up to 10 feet (3 m). They can often kill their prey in one powerful bite.

Birds up to the size of a swan are also taken, along with their fledglings and eggs. The bobcat is an opportunistic predator. 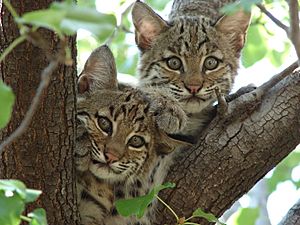 The female raises the young alone. One to six, but usually two to four, kittens are born in April or May, after roughly 60 to 70 days of gestation. Sometimes, a second litter is born as late as September. The female generally gives birth in an enclosed space, usually a small cave or hollow log.

The young open their eyes by the ninth or tenth day. They start exploring their surroundings at four weeks and are weaned at about two months. Within three to five months, they begin to travel with their mother. They hunt by themselves by fall of their first year, and usually disperse shortly thereafter.

The average bobcat lifespan is 7 years long and rarely exceeds 10 years. The oldest wild bobcat on record was 16 years old, and the oldest captive bobcat lived to be 32. 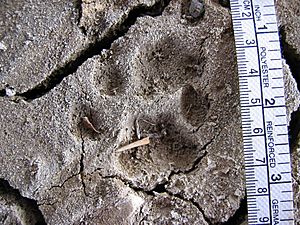 Like all cats, the bobcat 'directly registers', meaning its hind prints usually fall exactly on top of its fore prints. Bobcat tracks can be generally distinguished from feral or house cat tracks by their larger size.

All content from Kiddle encyclopedia articles (including the article images and facts) can be freely used under Attribution-ShareAlike license, unless stated otherwise. Cite this article:
Bobcat Facts for Kids. Kiddle Encyclopedia.