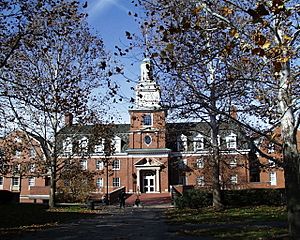 The Stocker Center which is on the campus.

The athletics teams of the university are called the Bobcats. They have 16 varsity teams and they compete in the Mid-American Conference.

All content from Kiddle encyclopedia articles (including the article images and facts) can be freely used under Attribution-ShareAlike license, unless stated otherwise. Cite this article:
Ohio University Facts for Kids. Kiddle Encyclopedia.