Lancaster ( lank-(Ə-)stər) is a city in Fairfield County, Ohio, in the south central part of the state. As of the 2020 census, the city population was 40,552. The city is near the Hocking River, about 33 miles (53 km) southeast of Columbus and 38 miles (61 km) southwest of Zanesville. It is the county seat of Fairfield County.

The earliest known inhabitants of the southeastern and central Ohio region were the Hopewell, Adena, and Fort Ancient Native Americans, of whom little evidence survived, beyond the burial and ceremonial mounds built throughout the Ohio and Mississippi valleys. Many mounds and burial sites have also yielded archaeological artifacts. (See also: Serpent Mound and Hopewell Culture National Historical Park, which though not located in Fairfield County, are close by.)

Prior to and immediately after European settlement, the land today comprising Lancaster and Fairfield County, Ohio was inhabited variously by the Shawnee, Iroquois, Wyandot, and other Native American tribes. It served as a natural crossroads for the intertribal and intra-tribal wars fought at various times. (See also: Beaver Wars) Noted frontier explorer Christopher Gist reached the vicinity of Lancaster on January 19, 1751, when he visited the small Delaware town of "Hockhocking" nearby. Leaving the area the next day, Gist rode southwest to "Maguck", another Delaware town near Circleville.

Having been ceded to the United States by Great Britain after the American Revolution by the Treaty of Paris, the lands north of the Ohio River and west of the Appalachian Mountains became, in 1784, incorporated into the Northwest Territory. White settlers began to encroach on Native American lands in the Ohio Territory. As the new government of the United States began to cast its eye westward, the stage was set for the series of campaigns that culminated in the Battle of Fallen Timbers in 1794, and the Treaty of Greenville in 1795. With pioneer settlement within Ohio made legal and safe from Indian raids, developers began to speculate in land sales in earnest.

Knowing that such speculation, combined with Congressional grants of land sections to veterans of the Revolution, could result in a lucrative opportunity, Ebenezer Zane in 1796 petitioned the United States Congress to grant him a contract to blaze a trail through Ohio, from Wheeling, West Virginia, to Limestone, Kentucky, (near modern Maysville, Kentucky) a distance of 266 miles (428 km). As part of the deal, Zane was awarded square-mile tracts of land at the points where his trace crossed the Hocking, Muskingum, and Scioto rivers. Zane's Trace, as it has become known, was completed by 1797, and as Zane's sons began to carve the square-mile tract astride the Hocking into saleable plots, the city of Lancaster formally came into being in 1800. Lancaster predated the formal establishment of the state of Ohio by three years. There were also many villages and townships settled right outside of Lancaster around the same time i.e. Lithopolis, Royalton, Bloom, Carroll, and Greencastle, which contributed to the booming success of the small village.

The initial settlers were predominantly of German stock, and emigrated from Pennsylvania. Ohio's longest continuously operating newspaper, the Lancaster Eagle-Gazette was born of a merger of the early Der Ohio Adler, founded about 1807, with the Ohio Gazette, founded in the 1830s. The two newspapers were ferocious competitors since they were on opposite sides of the American Civil War, as was the split populace of the city itself, until they merged seventy-two years after the war's end in 1937. This was shortly after the Gazette was acquired by glassmaker Anchor-Hocking. The newspaper is currently part of the Newspaper Network of Central Ohio, which is in turn a unit of Gannett Company, Inc.

Initially known as New Lancaster, and later shortened by city ordinance (1805), the town quickly grew; formal incorporation as a city came in 1831. The connection of the Hocking Canal to the Ohio and Erie Canal in this era provided a convenient way for the region's rich agricultural produce to reach eastern markets.

Modern Lancaster is distinguished by a rich blend of 19th-century architecture (best evidenced in historic Square 13, part of Zane's original plot) and natural beauty (best evidenced by the famous Standing Stone, today known as Mount Pleasant) with all the typical modern accoutrements of a small-medium-sized American city. 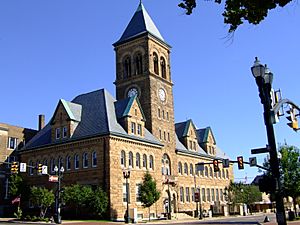 A famous Lancaster landmark is Mount Pleasant, a 250-foot (76 m) high sandstone bluff called "Standing Stone" by earlier Native American peoples. It is located in Rising Park, a large city park on the city's north side. It is possible to climb to the top of Mount Pleasant by following a short marked trail from the park through the woods that cover the bluff's other sides. There is also a cave known unofficially as "Devils Kitchen" in the front in which braver people are willing to climb about 20 feet (6.1 m) using only shallow "bear claws". Experienced rock climbers have climbed the sandstone face of the bluff many times as well. Once one has reached the top, there is a lookout area from which one can see over great distances, and take in not just a panoramic view of the nearby Fairfield County fairgrounds and much of the city of Lancaster, but the changing landscape of Central Ohio as well—from the relatively flat farmlands north of Lancaster to the wooded hills lying south of the city.

AHA! A Hands on Adventure

AHA! is a children's museum founded in 2006 whose sole mission is to surround children and the adults in their lives with a hands-on, interactive, playful and educational environment that invites curiosity, allows exploration, encourages participation and celebrates the childlike wonder in us all.

Originally built in 1832 for the Maccracken Family, this Federal home is constructed predominantly of brick and local limestone. Converted into a museum, it is now furnished as it would have been in the 1830s with some original pieces and numerous early Fairfield County, Ohio items. Located in one of Lancaster's three National Historic Districts, the structure mixes elements of American, Georgian and Regency architecture.

The Decorative Arts Center of Ohio

The Decorative Arts Center of Ohio is a not-for-profit museum whose mission is to foster knowledge and appreciation of the decorative arts; celebrate the architecture and heritage of the Reese-Peters House; and enhance the vitality and integrity of historic Lancaster. The Center provides exhibitions, public programs, art classes and workshops for all ages, and a focus for research and communication about the decorative arts of Ohio.

Opened in 2002, the Ohio Glass Museum is located in historic downtown Lancaster and dedicated to recording the history of the glass industry, which for over 100 years has been one of the mainstays of the economy of Fairfield County.

Lancaster was the birthplace of Civil War General William Tecumseh Sherman and his brother, Senator John Sherman. The house in which they were born has been converted into a museum, housing both articles related to the life of General Sherman and Civil War artifacts. Originally built in 1811, this frame house was expanded by the Sherman family in 1816 and again with an additional brick front in 1870.

According to the city's 2017 Comprehensive Annual Financial Report, Lancaster's top employers are:

Lancaster is the birthplace and/or hometown of:

All content from Kiddle encyclopedia articles (including the article images and facts) can be freely used under Attribution-ShareAlike license, unless stated otherwise. Cite this article:
Lancaster, Ohio Facts for Kids. Kiddle Encyclopedia.