The Great Serpent Mound is a 1,348-foot-long (411 m), three-foot-high prehistoric effigy mound on a plateau of the Serpent Mound crater along Ohio Brush Creek in Adams County, Ohio. Maintained within a park by Ohio History Connection, it has been designated a National Historic Landmark by the United States Department of Interior. The Serpent Mound of Ohio was first reported from surveys by Ephraim Squier and Edwin Davis in their historic volume Ancient Monuments of the Mississippi Valley, published in 1848 by the newly founded Smithsonian Museum. The Serpent Mound is the largest serpent effigy in the world. 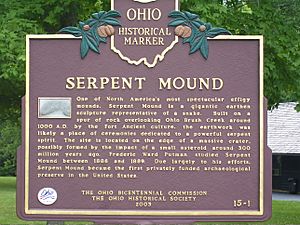 Including all three parts, the Serpent Mound extends about 1,376 feet (419 m), varies in height from less than a foot to more than three feet (30–100 cm), and has a width of 20 to 25 feet. Conforming to the curve of the land on which it rests, with its head approaching a cliff above a stream, the serpent winds back and forth for more than eight hundred feet and seven coils, and ends in a triple-coiled tail. The shape itself consisted mostly of a layer of yellowish clay and ash that was reinforced with a layer of rocks, and then covered with a layer of soil. The serpent head has an open mouth extending around the east end of a 120-foot (37 m)-long hollow oval feature that may represent the snake eating an egg, though some scholars posit that the oval feature symbolizes the sun, the body of a frog, or merely the remnant of a platform. The effigy's extreme western feature is a triangular mound approximately 31.6 feet (9.6 m) at its base and long axis. There are similar serpent effigies in Ontario and Scotland.

Archaeologists are still debating the origin of Serpent Mound. The mound contains no artifacts and no burials that would help establish the age of the mound. The two leading theories are that the mound was built by either the Adena Culture (800 BC to 100 AD) around 320 BC, or the Fort Ancient Culture (1000 to 1750 AD) around 1070 AD.

Archaeologist began attributing the mound to the Fort Ancient culture (circa 1070 AD) with the publication of "Serpent Mound: A Fort Ancient Icon?" in 1996. A 2017 article, "Radiocarbon Dates Reveal Serpent Mound Is More than Two Thousand Years Old", argues for a construction by the Adena culture circa 320 BC. The academic debate continues with multiple rebuttals to each theory published in the Journal of Archaeology.

Historically, researchers first attributed the mound to the Adena culture (1000 BC – 100 AD). William Webb, noted Adena exponent, found evidence through carbon dating for Kentucky Adena as early as 1200 BC. As there are Adena graves near the Serpent Mound, scholars thought the same people constructed the mound. The skeletal remains of the Adena type uncovered in the 1880s at Serpent Mound indicate that these people were unique among the ancient Ohio Valley peoples.

An eight-member team led by archaeologist William F Romain has been published in the Journal of Archaeological Science. The team found much older charcoal samples in less-damaged sections of the mound. The investigators conjecture that the mound was originally built between 381 BC and 44 BC, with a mean date of 321 BC. They explain the more recent charcoal found in the 1990s as likely the result of a "repair" effort by indigenous people around 1070 AD, when the mound would already have been suffering from natural degradation. 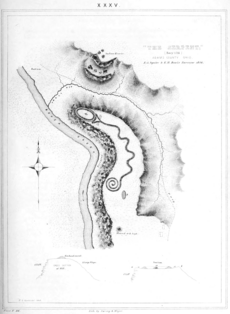 Squier and Davis's map from Ancient Monuments of the Mississippi Valley, published by the Smithsonian Institution Press in 1848

In 1996, the team of Robert V. Fletcher and Terry L. Cameron (under the supervision of the Ohio Historical Society's Bradley T. Lepper) reopened a trench created by Frederic Ward Putnam of Harvard over 100 years before. They found a few pieces of charcoal in what was believed to be an undisturbed portion of the Serpent Mound. However, bioturbation, including burrowing animals, frost cracks, etc., can reverse the structural timeline of an earthen mound such as Serpent Mound. It can shift carbon left by a later culture on the surface to areas deep within the structure, making the earthwork appear younger.

When the team conducted carbon dating studies on the charcoal pieces, two yielded a date of ca. 1070 AD, with the third piece dating to the Late Archaic period some two thousand years earlier, specifically 2920+/-65 years BP (before the present). The third date, ca. 2900 BP, was recovered from a core sample below cultural modification level. The first two dates place the Serpent Mound within the realm of the Fort Ancient culture. The third dates the mound back to very early Adena culture or before.

The Fort Ancient people could have been the builders of the Serpent Mound. Alternatively, they may have refurbished the earthwork for their own use in the same way that people today fix up old houses to make them suitable for occupation again. The rattlesnake is significant as a symbol in the Mississippian culture, which would help explain the image of the mound. However, there is no sign or indication of a rattle.

One of the only other effigy mounds in Ohio, the Alligator Effigy Mound in Granville, was carbon dated to the Fort Ancient period. 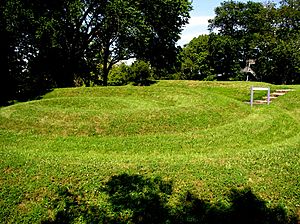 The spiral tail at the end of the Serpent Mound

A depiction of the serpent mound that appeared in The Century periodical in April 1890, drawn by William Jacob Baer.

If 1070 AD is accurate as the construction year, building the mound could theoretically have been influenced by two astronomical events: the light from the supernova that created the Crab Nebula in 1054, and the appearance of Halley's Comet in 1066. The supernova light would have been visible for two weeks after it first reached earth, even during the day. The Halley's Comet's tail has always appeared as a long, straight line and does not resemble the curves of the Serpent Mound. Halley's comet appears every 76 years. Numerous other supernovas may have occurred over the centuries that span the possible construction dates of the effigy.

The mound is located on the site of a classic astrobleme, an ancient meteorite impact structure. One of the strongest clues to the impact origin of this structure is in the pattern of disruption of sedimentary strata. In the center of the structure, strata have been uplifted several hundred feet, in much the same way that the central uplifts of lunar craters such as Copernicus were formed. In 2003 geologists from Ohio State University and the University of Glasgow (Scotland) corroborated the meteorite impact origin of the structure at Serpent Mound. They had studied core samples collected at the site in the 1970s. Further analyses of the rock core samples indicated the impact occurred during the Permian Period, about 248 to 286 million years ago; thus, the topographic expression of this impact, an impact crater, has been completely erased by erosion.

The Serpent Mound was first mapped by Euro-Americans as early as 1815. In 1846 it was surveyed for the Smithsonian Institution by two Chillicothe men, Ephraim G. Squier and Edwin Hamilton Davis. Their book Ancient Monuments of the Mississippi Valley (1848), published by the Smithsonian, included a detailed description and map of the serpent mound.

Ancient Monuments of the Mississippi Valley fascinated many across the country, including Frederic Ward Putnam of the Peabody Museum of Archaeology and Ethnology at Harvard University. Putnam spent much of his career lecturing and publishing on the Ohio mounds, specifically the Serpent Mound. When he visited the Midwest in 1885, he found that plowing and development were destroying many of the mounds. In 1886, with help from a group of wealthy women in Boston (such as the noted Glass Flowers' patroness Mary Lee Ware), Putnam raised funds to purchase 60 acres (240,000 m2) at the Serpent Mound site for preservation. The purchase also contained three conical mounds, a village site and a burial place. Serpent Mound is listed as a "Great Wonder Of the Ancient World" by National Geographic Magazine.

Originally purchased on behalf of the Trustees of the Peabody Museum, in 1900 the land and its ownership were granted to the Ohio State Archaeological and Historical Society (a predecessor of the present Ohio Historical Society).

The Ohio Historical Society designated the Arc of Appalachia Preserves system, a project of Highlands Sanctuary, Inc., as the managing agency of Serpent Mound

Following an instance of vandalism in 2015, more security cameras and protective gates were added. 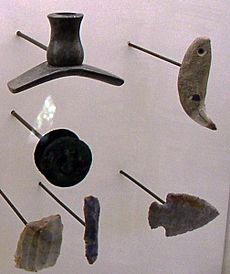 Hopewell pipe, points, and earspool on display at Serpent Mound 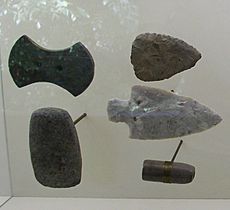 Gorgets and points from the Adena culture, found at Serpent Mound

After raising sufficient funds, in 1886 Putnam returned to the same site. He worked for four years excavating the contents and burial sequences of both the Serpent Mound and two nearby conical mounds. After his work was completed and his findings documented, Putnam worked on restoring the mounds to their original state.

One of the conical mounds that was excavated by Putnam (1890) yielded a principal burial which has grave goods that associate it with the Adena period (800 BC-100 BC). He also found and excavated nine intrusive burials in the mound. Additionally, Putnam discovered an ash bed north of the conical mound that contained many prehistoric artifacts. After the excavation, the conical mound was reconstructed and is today standing south of the parking lot at Serpent Mound State Memorial.

In 2011, excavations were undertaken prior to installation of utility lines at Serpent Mound State Memorial. The excavations focused on three sides of the conical mound that Putnam (1890) had excavated. In addition to concentrations of artifacts, an ashy soil horizon was excavated north of the conical mound. The ashy soil horizon had prehistoric artifacts associated with them. It is believed that the ashy deposit is a remnant of the ash bed that Putnam (1890) excavated. Wood charcoal from within the remnant ash bed was carbon dated to 1041-1211 AD, the Fort Ancient period. Because the burials in the conical mound dated to the Early Woodland period, the Fort Ancient period dating of the remnant ash bed is suggestive of ritual reuse of the circum mound area. 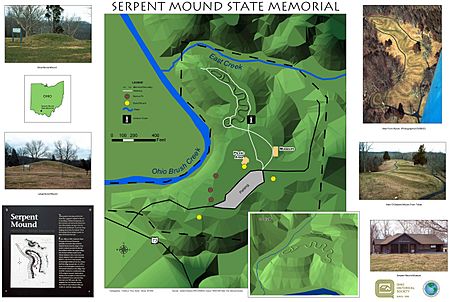 A digital GIS map of Ohio's Great Serpent Mound, created by Timothy A. Price and Nichole I. Stump in March 2002

In 1901, the Ohio Historical Society hired engineer Clinton Cowan to survey newly acquired lands. Cowan created a 56 by 72-inch (1,800 mm) map that depicted the outline of the Serpent Mound in relation to nearby landmarks, such as rivers. Cowan also made specific geographical surveys of the area, and he discovered the unique astrobleme on which the mound is based. He found that the mound is at the convergence of three distinctly different soil types. Cowan's information, in conjunction with Putnam's archaeological discoveries, has been the basis for all modern investigations of the Serpent Mound.

In 1967, the Ohio Historical Society opened the Serpent Mound Museum, built near the mound. A pathway was constructed around the base of the mound to help visitors. The museum features exhibits that include interpretations of the effigy's form, description of the processes of constructing the mound, the geographical history of the area, and an exhibit on the Adena culture, historically credited as the creators of the mound.

Serpent Mound State Memorial is currently being operated on behalf of the Ohio Historical Society by the Arc of Appalachia Preserve System. It is a non-profit organization specializing in the preservation and protection of native biodiversity and prehistoric aboriginal sites in southern Ohio.

All content from Kiddle encyclopedia articles (including the article images and facts) can be freely used under Attribution-ShareAlike license, unless stated otherwise. Cite this article:
Serpent Mound Facts for Kids. Kiddle Encyclopedia.