Adams County is a county in the U.S. state of Ohio. As of the 2020 census, the population was 27,477. Its county seat is West Union. The county is named after John Adams, the second President of the United States.

The Adams County Public Library serves the communities of Adams County, Ohio from its administrative location in Peebles and branches in Manchester, West Union, and Seaman. 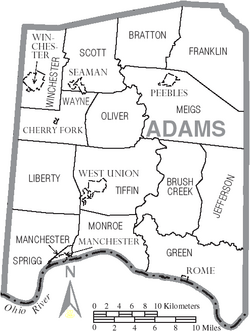 Map of Adams County, Ohio With Municipal and Township Labels

The economy of Adams County employs 10,100 people. Its largest industries are manufacturing (1,774 people), retail trade (1,618 people), and health care and social assistance (1,599 people), and the highest paying industries are utilities ($69,063), and finance and insurance ($56,938). A 2019 report identified Adams County as the poorest in Ohio with a 23.8% poverty rate and median household income of $36,320 ($16,000 less than the state average). The county also has the state's highest unemployment rate at 6.8%. Poor economic conditions led to a 2.1% decrease in the county's population during the previous five years.

All content from Kiddle encyclopedia articles (including the article images and facts) can be freely used under Attribution-ShareAlike license, unless stated otherwise. Cite this article:
Adams County, Ohio Facts for Kids. Kiddle Encyclopedia.