Brown County is a county in the U.S. state of Ohio. As of the 2020 United States Census, the population was 43,676. The county seat is Georgetown. The county was created in 1818 and is named for Major General Jacob Brown, an officer in the War of 1812 who was wounded at the Battle of Lundy's Lane. 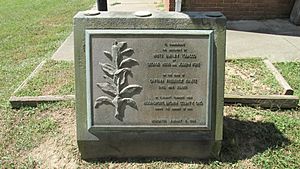 White burley tobacco monument dedicated on August 7, 1964 and located at the Ohio Tobacco Museum in Ripley.

Among the early settlers to Brown County was Jesse Root Grant, father of Ulysses S. Grant, who built a home and set up a tannery in Georgetown where Ulysses grew up.

Brown County was said to be the place of origin of the White Burley type of tobacco, grown in 1864 by George Webb and Joseph Fore on the farm of Captain Frederick Kautz near Higginsport from seed from Bracken County, Kentucky. He noticed it yielded a different type of light leaf shaded from white to yellow, and cured differently. By 1866, he harvested 20,000 pounds of Burley tobacco and sold it in 1867 at the St. Louis Fair for $58 per hundred pounds. By 1883, the principal market for this tobacco was Cincinnati, but it was grown throughout central Kentucky and Middle Tennessee. Later the type became referred to as burley tobacco, and it was air-cured.

Map of Brown County, Ohio With Municipal and Township Labels

All content from Kiddle encyclopedia articles (including the article images and facts) can be freely used under Attribution-ShareAlike license, unless stated otherwise. Cite this article:
Brown County, Ohio Facts for Kids. Kiddle Encyclopedia.