Clermont County, prominently called Clermont (CLAIR-mawnt), is a county in the U.S. state of Ohio. As of the 2010 census, the population was 197,363. Ordinanced in 1800, Clermont is Ohio's eighth oldest county, the furthest county west in Appalachian Ohio, and the eleventh oldest county of the former Northwest Territory. The county is named for the Clermont Province of France, the home of Vercingetorix, and literally translates "Clear Mount."

It is one of the Appalachian counties considered inside the Cincinnati metropolitan area, Ohio’s largest interstate MSA.

All of Clermont’s elected officeholders, including judges, are members of the Republican Party.

Encompassing all of Clermont, the 14th Ohio Senate seat is occupied by Joe Uecker, last elected 2016.

The elected Probate/Juvenile Court is occupied by Judge James A. Shriver.

Aviation is served by the Clermont County Airport. Clermont’s newspapers are the Clermont Sun, positing historical stories and statistics, and the Community Press papers. According to the County's 2013 Comprehensive Annual Financial Report, the top employers in the county are:

Clermont is the location of East Fork State Park and Stonelick State Park, and also benefits from the Clermont Public Libraries.

Clermont’s peopling is one of Ohio's most distinct and storied. Clermont’s name is taken from a prefecture in France notable as the home of Celtic leader Vercingetorix who led the unified Gallic resistance to Roman invasion, as well as philosopher Blaise Pascal. Clermont connotes "clear mountain," which described the area when it was first viewed through the thick Ohio River fog by French explorers in the 1600s. Clermont’s peoplification dates to the Paleoindian, Adena, Hopewell, and Fort Ancient cultures. The Gatch Site and other sites provide glimpses into what life was like for these otherwise mysterious people. The Shawondasee, Miami, Lenape, Mingo, Odawa, Cherokee, and Wyandot each have or had a presence in Clermont.

At its ordinance in 1800 by the Commonwealth of Virginia to reward Virginian military veterans with land bounties, Clermont encompassed twenty-three current Ohio counties and over 4.2 million acres of dense oldgrowth forest. The first deed was issued on 20 February 1796. George Washington owned three parcels of land in Clermont County, whose first capital was Williamsburg, founded by William Lytle, and like Milford, was founded in 1796. A stone dairy house, constructed in 1800, is thought to be the oldest standing building in Clermont. The edifice is located beside Harmony Hill on South Third Street in Williamsburg. Harmony Hill, one of the area’s first farms, was built by William Lytle.

The last American Indian village was located two miles south of Marathon in Jackson Township, along the mouth of Grassy Run on the East Fork of the Little Miami River. The site saw the largest frontier battle in Clermont, the Battle of Grassy Run, during which pioneer Simon Kenton clashed with chief Tecumseh on April 10, 1792. The Wyandot lived at this site until 1811. The Bullskin Trail, once a major American Indian trail, runs north and south through Clermont along Ohio Route 133, and was used by frontiersmen Kenton and Daniel Boone on hunting and warfare expeditions.

In 1823, New Richmond became the capital, and in 1824, it moved to Batavia, the current capital. Clermont's Moscow became the exiled home of French royalty during the early 1800s, including future King of France Louis-Philippe in 1815 and the Marquis de Lafayette in 1825. Point Pleasant was birthplace and boyhood home of military hero, Union general, and President Ulysses S. Grant, born on 27 April 1822.

During the 1800s, antislavery sentiment remained strong. Bethel was the residence of Democratic United States Senator Thomas Morris who also served three terms in the Ohio House of Representatives, as Ohio Supreme Court Justice, and four terms in the Ohio Senate. His U.S. Senate career lasted from 1833 to 1839, and in 1844, Morris was the vice presidential candidate for a third party with the goal of abolishing slavery—approximately sixteen years before the first antislavery Republican president. Also in 1844, Clermont became the site of Utopia, an egalitarian haven of Puritans who espoused the doctrines of François Marie Charles Fourier. In 1847, future Ohio Governor John M. Pattison was born near Owensville. Grant became commander-in-chief of the U.S. Army in the Civil War, during which John Hunt Morgan and his Confederate raiders invaded Clermont in 1863. Grant was elected the eighteenth president in 1868.

Clermont’s last-standing covered bridge was built in 1878 on Stonelick Williams Corner Road, near US Route 50; it was renovated in 2014. The Grant birthplace, originally a one-room cabin, continues to welcome visitors and in 1890 was removed from its original location, travelling by boat to be viewed by citizens along various waterways. It was also taken to the 1893 Chicago World’s Fair before returning to Clermont.

In 1900, a group of clerics from numerous congregations gathered to create a list of ten places on Earth where the Garden of Eden could have been located. Among the locations was Clermont County, Ohio – listed for its many fruiting trees and the early influence of American Indians who built earthen mounds in the form of serpents. Subsequently, prominent men from Hamilton County dedicated Eden Park facing Clermont to honor the distinction.

Pattison became the first Clermont Countian elected Governor of Ohio in 1905, Ohio's first Democratic governor of the twentieth century. Pattison lived in Milford, and at a time before the influence of Columbus, governed from his home called Promont, which was used as the official governor's residence. The mansion, completed in 1865, today is a museum that houses a library and other historical memorabilia. It is located at 906 Main Street, Milford.

Democrat Hugh Llewellyn Nichols of Batavia served as 32nd Lieutenant Governor of Ohio and became the first Chief Justice of the Ohio Supreme Court in 1914. Orpha Errans Gatch of Milford locally organized women’s suffrage, and is the namesake for the Clermont County League of Women Voters award given annually at its suffragist brunch to recognize the recipient’s volunteerism and leadership qualities. Clermont's progressivism created a climate of political independence. Despite recent Republican prevalence in its offices, heavy nonpartisan and union influences exist. Clermont’s growing population as well as environmentalism have contributed to this climate.

Clermont has been visited by recent national ticket candidates from both predominate parties.

Clermont locales are not publicated necessarily along historical or perceived collectivity, hence Goshen Township and unincorporated Goshen. To review each locale’s unique designs and bodies, click their links. 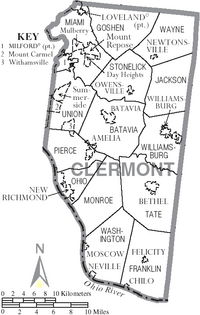 Map of Clermont County, Ohio With Municipal and Township Labels

Each municipality has an elected-nonpartisan council where the highest vote-getter is designated mayor. Mayors preside during mayor’s court, among various other roles. These mayor-council arrangements pass municipal ordinances and affect municipal taxes, such as the municipal income tax where most of the revenue comes from.

Both of Clermont’s cities, Loveland and Milford (largest municipality), have municipal departments that operate services, and both cities presently have appointed managers instead of a true mayoralty. Both city areas are small, relative to nearby cities Fairfield, Hamilton, and Mason.

Each township has three elected trustees, one elected fiscal officer, and one appointed administrator. Trustees can introduce levies for, and vote to regulate, the township services, zoning boards, parks, and upkeep, but do not have municipal taxes. These vast locales currently surround Clermont’s municipalities:

These formerly autonomous historic locales are ensconced within Clermont’s townships, but not within its cities or villages:

These locales are ensconced within Clermont’s cities or townships, but not within its villages:

These buildings may not have been high schools when they were first constructed, but have since become high schools. The building years listed connotate the current buildings’ initial openings and do not include renovations or additions.

All content from Kiddle encyclopedia articles (including the article images and facts) can be freely used under Attribution-ShareAlike license, unless stated otherwise. Cite this article:
Clermont County, Ohio Facts for Kids. Kiddle Encyclopedia.