Loveland is a city in Hamilton, Clermont, and Warren counties in the southwestern part of the U.S. state of Ohio. Considered part of the Greater Cincinnati area, Loveland is located near exit 52 off Interstate 275, about 15 miles (24 km) northeast of the Cincinnati city limits. It borders Symmes, Miami and Hamilton Townships and straddles the Little Miami River. The population was 12,081 at the 2010 census and was estimated at 13,145 in 2019. Once a busy railroad town, Loveland is now a major stop along the Little Miami Scenic Trail.

Loveland can be reached by car most easily via Interstate 275, but State Route 48 also serves the city. State Route 3 / U.S. Route 22 touches the northwestern corner of Loveland, and State Route 126 passes through Remington and Miamiville to the south.

Loveland is located within three counties: Hamilton, Clermont and Warren. At least 61 Ohio cities cross county lines. Loveland has withdrawn from Symmes, Miami, and Hamilton Townships to form a coextensive set of paper townships each named Loveland Township. Historic Downtown Loveland and the central business district lie in a small valley on opposite sides of the Little Miami Scenic River, the boundary between Hamilton and Clermont counties, whereas most of Loveland's residential areas are located on the hills surrounding the valley on either side. Loveland City Hall is located in Clermont County, whereas most of the population resides in Hamilton County.

These areas include some neighborhoods from the 1950s and earlier, as well as a number of newer subdivisions built as part of the urban sprawl that saw nearby Mason grow tremendously. Unlike Mason and other suburbs closer to Interstate 71 and Interstate 75, Loveland is considered somewhat of a "bedroom community", where residential neighborhoods (and churches) seemingly outnumber businesses, and many residents make the half-hour commute to Downtown Cincinnati for work each day.

The 513 area code includes the entirety of Loveland. The 45140 ZIP code also includes the entire city, with the exception of a few recently annexed businesses that belong to the 45249 ZIP code (Symmes). The United States Postal Service lists a number of place names as unacceptable for this ZIP code, including "Murdock" and "Twenty Mile Stand"; however, "Loveland, Ohio" is acceptable for Camp Dennison's 45111 ZIP code. The 45108 FIPS55 code and US XHT LOCODE both correspond to the city proper.

Present-day Loveland originally lay at the edges of the Symmes Purchase and Virginia Military District, in what was then the Northwest Territory. The area was first settled in 1795 by Col. Thomas Paxton:

The city is named after James Loveland, who operated a general store and post office near the railroad tracks downtown. It was incorporated as a village on May 12 or 16, 1876, and incorporated as a chartered city in 1961. 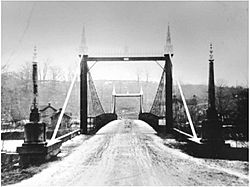 The 1872 Branch Hill Bridge (Loveland Bridge) that spanned the Little Miami River just south of Loveland. It was replaced by the less ornate "Blue Bridge" in 1922.

In its early days, Loveland was known as a resort town, with its summer homes for the wealthy, earning it the nickname "Little Switzerland of the Miami Valley." Future Chief Justice Salmon P. Chase maintained a country home near Loveland, while the Cincinnati YWCA maintained a summer cottage there. The area was also home to Ohio's first paper mill, built in 1810 by John Smith. A local road retains the mill's eventual name, Kugler Mill. The area surrounding Loveland in Clermont County was well known for its peaches and strawberries.

Another railroad ran through antebellum Loveland: the Underground Railroad's Eastern Route from Cincinnati included a stop at the village and continued northward to Waynesville and Lebanon. During the Civil War, Confederate Brig. Gen. John Hunt Morgan and his troops passed through Loveland, seizing possessions of northern and southern sympathizers alike (see Morgan's Raid).

Until wagon bridges were built across the Little Miami River, settlement of Loveland was mostly confined to the Clermont County side, which had access to a railroad station. A wooden bridge spanned the river at Symmestown and Branch Hill from 1850 until it washed out six years later. For years, residents on both sides pushed for a bridge at Loveland, to avoid the long trip to Foster's Crossing or Miamiville, and by 1868 threatened to have Miami Township annexed to Hamiton County if Clermont County officials continued to obstruct the project. A $75,000 suspension bridge was finally built at Symmestown and Branch Hill and dedicated on July 4, 1871. It was anchored by four 7,000-pound (3,200 kg) wrought iron columns, at that time the heaviest ever made in the United States. A second bridge, connecting East and West Loveland, was completed between 1872 and 1876.

In 1876, the Cincinnati Campground at Loveland was the site of the holiness movement's tenth annual National Camp Meeting.

In 1886, the skeleton of a mastodon and prehistoric stone tools were found in a Loveland gravel pit.

In 1903, Loveland voted to become a dry village, prohibiting the sale of alcohol within the village limits 17 years before a national ban. Loveland was a center of the Temperance movement in Ohio.

Downtown Loveland's proximity to the Little Miami River has made it vulnerable to flooding. The worst such event, the Ohio Flood of March 1913, destroyed a corn mill and washed out the Loveland Bridge, which was replaced with an iron bridge the next year.

In the 1920s, The Cincinnati Enquirer ran a promotion that offered a free plot of land in Loveland, along the Little Miami River, after paying for a one-year subscription to the daily.

During the 1930s, the nearby town of Branch Hill was home to the Arrowhead Club, a casino associated with the Cleveland Syndicate that served residents of Indian Hill.

After a population spike during the 1950s, Loveland reincorporated as a chartered city – the first of only two in Clermont County – on July 25, 1961, with George Anderson as its first mayor. The city absorbed smaller settlements, such as Paxton, Obanionsville, and Symmestown. German architect Rudolf Fränkel developed a master plan for Loveland.

The long-abandoned Little Miami Railroad corridor was converted into a bike trail in the 1980s and became part of the Little Miami Scenic Trail in 1984.

Loveland has periodically sought to expand its borders by annexing surrounding areas, primarily to the more commercially active west. In 1993, the city attempted to annex parts of Deerfield Township, prompting petitions to instead merge the township with the City of Mason. Moves to merge Symmes Township with Loveland began the next year but ultimately failed. In 1996, Loveland moved its eastern border by purchasing Col. Paxton's original White Pillars homestead, which had remained unincorporated, despite being the first settlement in the Loveland area. 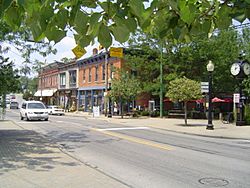 In the late 1990s, Loveland was designated a Tree City by the National Arbor Day Foundation, as it began a number of efforts to promote its Historic Downtown neighborhood, in part to celebrate the city's bicentennial. The programs included a renovation of Historic Downtown itself to sport a more "gentrified" look, for example replacing concrete sidewalks with brick ones, installing park benches throughout, and providing incentives to businesses willing to improve their façades. Major roads such as South Lebanon Road (County Road 298) were expanded and given landscaped medians.

The Loveland Beautification Committee was established to sponsor various programs and events that aim to improve landscapes and other buildings around town. Under the mayorship of Lee Skierkiewicz, Loveland heavily promoted itself as a cycling destination. The Tour de Loveland, an annual cycling race, was started in order to promote the Loveland Bike Trail as the centerpiece of Historic Downtown Loveland. The city's efforts culminated with USA Cycling Elite National Championship criteriums in June 1998. On January 24, 2005, Loveland City Council voted to cancel the Tour, due to declining attendance and a lack of sponsors.

On April 9, 1999, Loveland found itself in the path of an F4 tornado (see Fujita scale). The tornado claimed four fatalities, including a Loveland resident, before reaching the city.

With "four blooms", Loveland won the 2005 America in Bloom competition for cities with 10,001 to 15,000 residents. Loveland lost to St. Ives/Carbis Bay in the 2006 Communities in Bloom International Challenge, medium category, but won the "Communities in Bloom Youth Involvement Project Award."

In 2004, CSX Transportation leased the former Baltimore and Ohio railroad to RailAmerica's Indiana and Ohio Railway system. On May 4, 2007, Ohio's first four-quadrant gate was installed at the Second Street railroad crossing in Loveland, as part of a coordinated three-crossing system.

There were 4,701 households of which 38.3% had children under the age of 18 living with them, 52.5% were married couples living together, 13.4% had a female householder with no husband present, 3.7% had a male householder with no wife present, and 30.4% were non-families. 26.3% of all households were made up of individuals and 11.7% had someone living alone who was 65 years of age or older. The average household size was 2.55 and the average family size was 3.09. 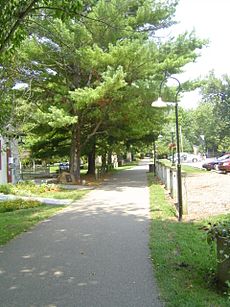 Loveland is included in the Dan Beard Council of the Boy Scouts of America, which operates the 506-acre (205 ha) Dan Beard Reservation campground in Miamiville to the south. Another landmark, Shield's Crossing, is located nearby. The Gothic-style building, also known as the William Johnston House, is listed on the National Register of Historic Places. The Grail's national headquarters and retreat center, known as Grailville, has been located just outside Loveland since 1944. 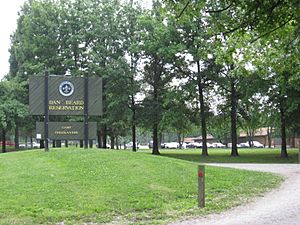 Loveland's indoor attractions include Castle Skateland, a roller skating rink not to be confused with the museum; and the Loveland Stage Company, a theatre group that started in 1979 and has performed at least two major productions each year since 1980. In October 2002, after several years of fundraising and renovations, the group moved into Crist Theater, an old movie theater donated by the Loveland–Symmes Fire Department, which is stationed next door. The building had to be rebuilt after a fire gutted it on October 20, 2008.

Until the late 1990s, the Baldwin Piano Company was headquartered in Loveland.

Although the city's unusual name came from the last name of the village storeowner and postmaster, rather than the concept, Loveland has incorporated a "love" theme throughout the city. Loveland water towers and park signs sport the city's logo: a red heart inscribed with a sun, clouds, and the Little Miami River, and surrounded with the city's nickname, "Sweetheart of Ohio." The Loveland Post Office, which began operations on October 24, 1831, as the Obionsville Post Office, was also the site of the United States Postal Service's unveiling of a special "Love Stamp" in 1994. Each year since 1972, the Loveland Area Chamber of Commerce has run a special Valentine's Day program, which includes a poetry contest and the selection of a volunteer "Valentine Lady". The Valentine Lady helps stamp up to 20,000 envelopes by hand with a Valentine-themed cachet and cancellation that reads "There is nothing in this world so sweet as Love." The first Valentine Lady was Doris Pfiester. As of 1992[update], Valentine's Day is the only day of the year when non-residents may reserve Loveland City Hall for marriage ceremonies, other than for senior citizens.

In 2013, Loveland was named a "Best Hometown" by Ohio Magazine.

Tourism associated with the Loveland Bike Trail forms a significant part of downtown Loveland's economy. There is light industry at the Loveland Commerce Park in the northwestern corner of the city. Companies headquartered in Loveland include Dos Madres Press and Rozzi Fireworks.

In 1880, when the first census was taken of Loveland in Clermont County, the village had 595 residents, while the unincorporated Hamilton County community of West Loveland had 197. In 1890, Loveland grew to 761 residents in Clermont and Warren counties, while West Loveland's population increased to 392. 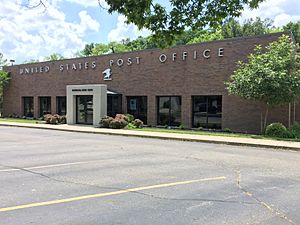 Loveland is protected by the Loveland Police Division and the Loveland–Symmes Fire Department, a member of the Northeast Fire Collaborative. Dispatching for both is handled by Northeast Communications Center (NECC), which provides Wireless Enhanced 911 service and also activates the local network of tornado sirens.

All content from Kiddle encyclopedia articles (including the article images and facts) can be freely used under Attribution-ShareAlike license, unless stated otherwise. Cite this article:
Loveland, Ohio Facts for Kids. Kiddle Encyclopedia.