Kids Encyclopedia Facts
Not to be confused with Hamilton, Ohio.

Hamilton County is a county located in the southwest corner of the U.S. state of Ohio. As of the 2010 census, the population was 802,374. making it the third-most populous county in Ohio. The county seat is Cincinnati. The county is named for the first Secretary of the Treasury, Alexander Hamilton.

Most of Hamilton County was originally owned and surveyed by John Cleves Symmes, and the region was a part of the Symmes Purchase. The first European-American settlers rafted down the Ohio River in 1788 following the American Revolutionary War. They established the towns of Losantiville (later Cincinnati) and Cleves.

Hamilton County was organized in 1790, as the second county in the Northwest Territory. Its area then included about one-eighth of Ohio, and had about 2,000 inhabitants (not including the remaining Native Americans). The United States persuaded most of the Shawnee and other Indian peoples to remove in the 1820s to locations west of the Mississippi River.

Since then, other counties were created from Hamilton, reducing the county to its present size. Rapid growth occurred during the 1830s and 1840s as the area attracted many German and Irish immigrants, especially after the Great Famine in Ireland and the revolutions in Germany in 1848.

During the Civil War, Morgan's Raid (a Confederate cavalry campaign from Kentucky) passed through the northern part of the county during the summer of 1863.

Cincinnati, Ohio viewed from the SW, across the Ohio River, in Kentucky.

The county lies in a region of gentle hills formed by the slopes of the Ohio River valley and its tributaries. The Great Miami River, the Little Miami River, and the Mill Creek also contribute to this system of hillsides and valleys. No naturally occurring lakes exist, but three major manmade lakes are part of the Great Parks of Hamilton County. The largest lake by far is Winton Woods Lake covering 188 surface acres followed by Miami Whitewater Lake covering 85 surface acres and Sharon Lake covering 36 surface acres.

The county boundaries include the lowest point in Ohio, located in Miami Township, where the Ohio River flows out of Ohio and into Indiana. This is the upper pool elevation behind the Markland Dam, 455 feet (139 m) above sea level.

The highest land elevation in Hamilton County is the Rumpke Sanitary Landfill at 1,045 feet (319 m) above sea level in Colerain Township. 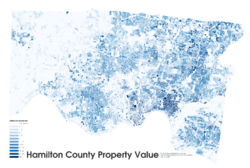 The county, in cooperation with the City of Cincinnati, operates the Public Library of Cincinnati and Hamilton County system with a main library and 41 branches. Major sports teams are listed under the communities in which they are located, primarily Cincinnati. The Great Parks of Hamilton County district resides within Hamilton County and maintains a series of preserves and educational facilities. Three of the largest parks within the system are Miami Whitewater Forest, Winton Woods, and Sharon Woods. The Hamilton County Fair is the oldest county fair in Ohio. 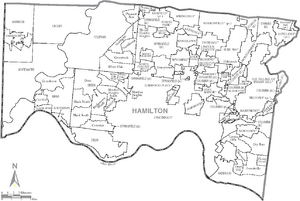 Map of Hamilton County, Ohio with Municipal and Township Labels

All content from Kiddle encyclopedia articles (including the article images and facts) can be freely used under Attribution-ShareAlike license, unless stated otherwise. Cite this article:
Hamilton County, Ohio Facts for Kids. Kiddle Encyclopedia.