Kids Encyclopedia Facts
Not to be confused with Butler, Ohio.

Butler County is a county located in the U.S. state of Ohio. As of the 2010 census, the population was 368,130. Its county seat is Hamilton. It is named for General Richard Butler, who died in 1791 during St. Clair's Defeat. It is also home to Miami University, an Ohio public university.

Butler County is part of the Cincinnati, OH-KY-IN Metropolitan Statistical Area and the majority of the county rest in District 52.

The county was once home to seven large earthworks sites, built by ancient Indigenous peoples of the Americas that lived in the area.

Early French explorers likely passed through the area along the Miami River. The gravesites of David and Margaret Gregory indicate that they were some of the first white settlers in the area in Liberty Township. White settlers began moving into the area in larger numbers after the 1793 Treaty of Greenville was signed with the Native Americans of the area.

The Great Flood of 1913 impacted much of the county, particularly the communities of Middletown, Ohio where approximately 25% of the town was flooded and 6 people died and Hamilton, Ohio, where 46% of the city was flooded, over 300 buildings destroyed and at least 98 people killed.

In the 1920s, Butler, Pickaway and Washington Counties were central areas of the rural membership of the Ku Klux Klan in Ohio.

In 1957 the Ohio Legislature established Hueston Woods State Park which covers 3,596 acres in Butler and neighboring Preble County, Ohio. In addition to a 625-acre man made lake, the park contains the 200 acre Hueston Woods, one of the last near-virgin growths of American beech and maple in Ohio.

The majority of Butler County consists of the river valleys of the Great and Little Miami Rivers. The valley was originally carved by glaciation.

The soil at highest uplands is frequently heavy in clay, moving downhill to a sandy loam, while in the valleys the soil is black with river deposits.

Before deforestation by settlers, much of the area was forests of American beech and maple trees. 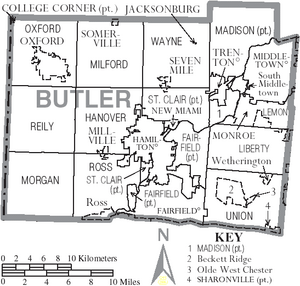 Map of Butler County, Ohio With Municipal and Township Labels

There are thirteen civil townships in Butler County and at least three paper townships:

All content from Kiddle encyclopedia articles (including the article images and facts) can be freely used under Attribution-ShareAlike license, unless stated otherwise. Cite this article:
Butler County, Ohio Facts for Kids. Kiddle Encyclopedia.