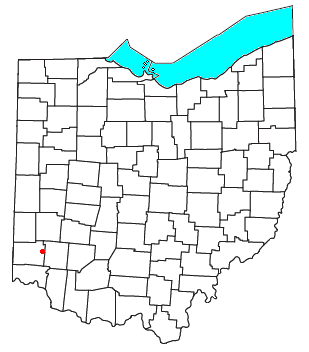 Excello is an unincorporated community in central Lemon Township, Butler County, Ohio, United States, on the south side of Middletown. It comprises roughly the area south of Oxford State Road and State Route 73, west of State Route 4, and east of the Great Miami River. The Excello Lock was a canal lock on the Miami and Erie Canal. Remnants of the lock remain as a local park. Also in Excello was former Harding-Jones Paper Company plant, which is now closed but is on the National Register of Historic Places.

Excello sprang up when the Excello Paper Company opened at the site in the 1860s. A post office was opened in Excello on November 10, 1870, but no longer exists.

All content from Kiddle encyclopedia articles (including the article images and facts) can be freely used under Attribution-ShareAlike license, unless stated otherwise. Cite this article:
Excello, Ohio Facts for Kids. Kiddle Encyclopedia.