Boehner is a member of the Republican Party. He served in the Ohio State House from 1985 to 1990. In 1990, he became a Congressman (a member of the United States House of Representatives. Boehner resigned in early October 2015. He was succeeded by Paul Ryan on October 29, 2015. 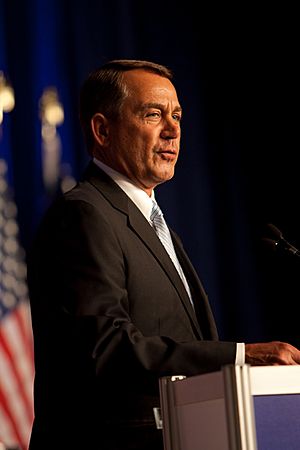 Boehner was born in Reading, Ohio, the second of twelve children. He grew up in modest circumstances, having shared one bathroom with his eleven siblings in a two-bedroom house in Cincinnati. He started working at his family's bar at age 8, a business founded by their grandfather in 1938. He has lived in Southwest Ohio his entire life.

Boehner attended Cincinnati's Moeller High School and was a linebacker on the school's football team, where he was coached by future Notre Dame coach Gerry Faust. Graduating from Moeller in 1968.

He earned his B.A. in business administration from Xavier University in 1977, becoming the first person in his family to attend college, taking seven years as he held several jobs to pay for his education.

Shortly after his graduation in 1977, Boehner accepted a position with Nucite Sales, a small sales business in the packaging and plastics industry. He was steadily promoted and eventually became president of the firm, resigning in 1990 when he was elected to Congress. 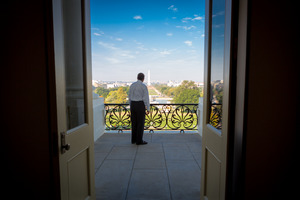 Speaker Boehner looks on the Speaker's balcony at the U.S. Capitol for one of the final times before leaving office

He has been in politics since 1985. He represents the area north of Cincinnati, Ohio. Boehner served as chair of several important committees before becoming Minority Leader in 2006. While minority leader, Boehner was one of the main people who were critical of President Obama. When the Republicans took back the House of Representatives in the 2010 elections, Boehner became Speaker of the House.

All content from Kiddle encyclopedia articles (including the article images and facts) can be freely used under Attribution-ShareAlike license, unless stated otherwise. Cite this article:
John Boehner Facts for Kids. Kiddle Encyclopedia.