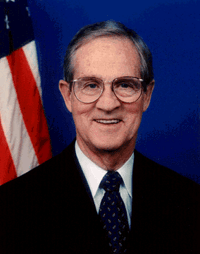 William Franklin "Bill" Goodling (December 5, 1927 – September 17, 2017) was an American Republican politician. He was born in Loganville, Pennsylvania. He was a member of the United States House of Representatives from Pennsylvania's 19th congressional district from 1975 through 2001.

At the time of his death, he was the Chairman of the Board of the Goodling Institute for Research in Family Literacy.

Goodling died from complications of a cerebral aneurysm on September 17, 2017 in York, Pennsylvania at the age of 89.

All content from Kiddle encyclopedia articles (including the article images and facts) can be freely used under Attribution-ShareAlike license, unless stated otherwise. Cite this article:
William F. Goodling Facts for Kids. Kiddle Encyclopedia.