He was born Newton Leroy McPherson in Harrisburg, Pennsylvania. He was adopted by his stepfather.

Gingrich was a Congressman from Georgia from 1978 to 1999. He was speaker of the House of Representatives from 1995 to 1999. He is known for bringing in the "Republican Revolution" in the House because his political party, the Republican Party, or GOP, after 40 years of the Democratic Party dominating Congress.

Gingrich had ran for President in 2012. On 2 May 2012, Gingrich ended his presidential campaign. 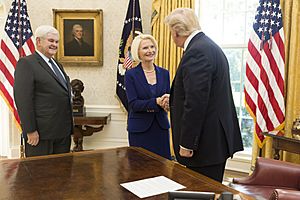 Gingrich and his wife alongside President Donald Trump, 24 October 2017

Gingrich supported Trump more quickly than many other establishment Republicans. After having consulted for Donald Trump's 2016 campaign, Gingrich encouraged his fellow Republicans to unify behind Trump, who had by then become the presumptive Republican presidential nominee. Gingrich reportedly figured among Trump's final three choices to be his running mate; the position ultimately went to Governor of Indiana Mike Pence.

Following Trump's victory in the presidential election, speculation arose concerning Gingrich as a possible Secretary of State, or Chief of Staff, or advisor. Eventually, Gingrich announced that he would not be serving in the cabinet. He stated that he didn't have the interest in serving in any role related to the Trump administration, stressing that as a private citizen he would engage with individuals for "strategic planning" rather than job-seeking.

All content from Kiddle encyclopedia articles (including the article images and facts) can be freely used under Attribution-ShareAlike license, unless stated otherwise. Cite this article:
Newt Gingrich Facts for Kids. Kiddle Encyclopedia.