Alfred Charles Sharpton Jr. (born October 3, 1954) is an American civil rights activist, Baptist minister, talk show host and politician. Sharpton is the founder of the National Action Network. In 2004, he was a candidate for the Democratic nomination for the U.S. presidential election.

He hosts his own radio talk show, Keepin' It Real, and he makes regular guest appearances on cable news television. In 2011, he was named the host of MSNBC's PoliticsNation, a nightly talk show. In 2015, the program was shifted to Sunday mornings.

Sharpton's supporters praise "his ability and willingness to defy the power structure that is seen as the cause of their suffering" and consider him "a man who is willing to tell it like it is."

Former Mayor of New York City Ed Koch, one-time foe, said that Sharpton deserves the respect he enjoys among black Americans: "He is willing to go to jail for them, and he is there when they need him."

President Barack Obama said that Sharpton is "the voice of the voiceless and a champion for the downtrodden."

A 2013 Zogby Analytics poll found that one quarter of African Americans said that Sharpton speaks for them.

Sharpton has written or co-written three books, Go and Tell Pharaoh, with Nick Chiles, Al on America, and The Rejected Stone: Al Sharpton and the Path to American Leadership. 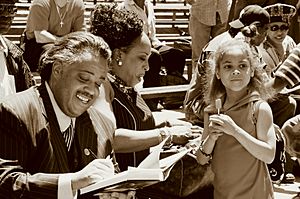 In 1963, Sharpton's father left his wife. Ada took a job as a maid, but her income was so low that the family qualified for welfare and had to move from middle class Hollis, Queens, to the public housing projects in the Brownsville neighborhood of Brooklyn. 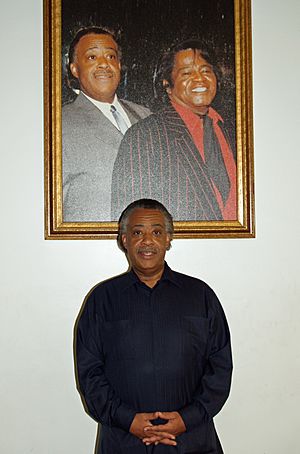 Al Sharpton (painting is of Al and James Brown

Sharpton graduated from Samuel J. Tilden High School in Brooklyn, and attended Brooklyn College, dropping out after two years in 1975. In 1972, he accepted the position of youth director for the presidential campaign of African-American Congresswoman Shirley Chisholm.

Between the years 1973 and 1980 Sharpton served as James Brown's tour manager. 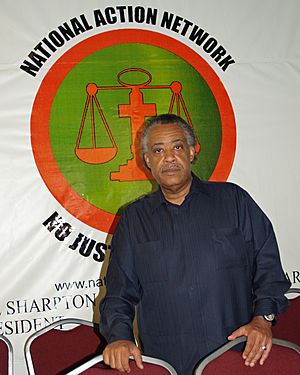 In September 2007, Sharpton was asked whether he considered it important for the US to have a black president. He responded, "It would be a great moment as long as the black candidate was supporting the interest that would inevitably help our people. A lot of my friends went with Clarence Thomas and regret it to this day. I don't assume that just because somebody's my color, they're my kind. But I'm warming up to Obama, but I'm not there yet."

Sharpton has spoken out against cruelty to animals in a video recorded for People for the Ethical Treatment of Animals.

Sharpton is a supporter of equal rights for gays and lesbians, including same-sex marriage. Sharpton is leading a grassroots movement to eliminate homophobia within the Black church. 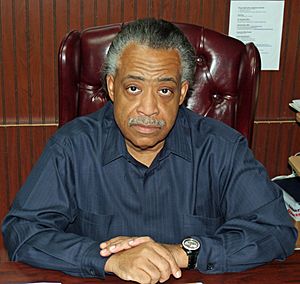 In 2014, Sharpton began a push for criminal justice reform, citing the fact that black people represent a greater proportion of those arrested and incarcerated in America.

In August 2017, Sharpton called for the federal government to stop maintaining the Jefferson Memorial in Washington, D.C., because Thomas Jefferson owned slaves and had children with his slave Sally Hemings. He said taxpayer funds should not be used to care for monuments to slave-owners and that private museums were preferable. 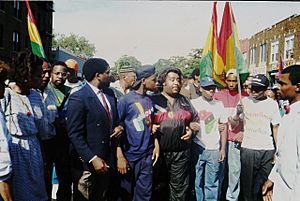 In 1969, Sharpton was appointed by Jesse Jackson to serve as youth director of the New York City branch of Operation Breadbasket, a group that focused on the promotion of new and better jobs for African Americans.

In 1971 Sharpton founded the National Youth Movement to raise resources for impoverished youth.

In 1999, Sharpton led a protest to raise awareness about the death of Amadou Diallo, an immigrant from Guinea who was shot to death by NYPD officers. Sharpton claimed that Diallo's death was the result of police brutality and racial profiling.

Diallo's family was later awarded $3 million in a wrongful death suit filed against the city, he has worked on many cases to be the voice of those done wrong by in the colored community. 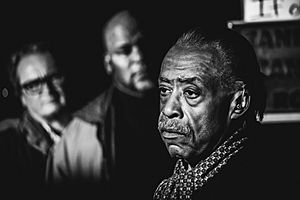 We Stand United - NYC Rally on Night Before Trump’s Inauguration

Sharpton was licensed and ordained a Pentecostal minister by Bishop F. D. Washington at the age of nine or ten. After Bishop Washington's death in the late 1980s, Sharpton became a Baptist.

He was re-baptized as a member of the Bethany Baptist Church in 1994 by the Reverend William Augustus Jones and became a Baptist minister.

During 2007, Sharpton participated in a public debate with atheist writer Christopher Hitchens, defending his religious faith and his belief in the existence of God.

On January 12, 1991, Sharpton escaped serious injury when he was stabbed in the chest in the schoolyard at P.S. 205 by Michael Riccardi while Sharpton was preparing to lead a protest through Bensonhurst in Brooklyn, New York. The intoxicated attacker was apprehended by Sharpton's aides and handed over to police, who were present for the planned protest. 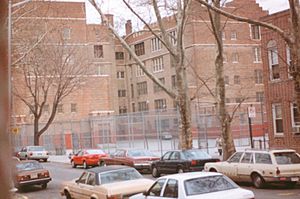 In 1992, Riccardi was convicted of first-degree assault. Sharpton asked the judge for leniency when sentencing Riccardi. The judge sentenced Riccardi to five to 15 years in jail, and he served ten years in prison being released on parole on January 8, 2001.

Sharpton, although forgiving his attacker and pleading for leniency on his behalf, filed suit against New York City alleging that the many police present had failed to protect him from his attacker. In December 2003, he finally reached a $200,000 settlement with the city.

All content from Kiddle encyclopedia articles (including the article images and facts) can be freely used under Attribution-ShareAlike license, unless stated otherwise. Cite this article:
Al Sharpton Facts for Kids. Kiddle Encyclopedia.