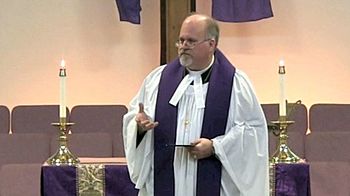 A Methodist minister wearing a cassock, vested with a surplice and stole, with preaching bands attached to his clerical collar

In Christianity, a minister is a person authorized by a church, or other religious organization, to perform functions such as teaching of beliefs; leading services such as weddings, baptisms or funerals; or otherwise providing spiritual guidance to the community.

The term is taken from Latin minister ("servant", "attendant").

All content from Kiddle encyclopedia articles (including the article images and facts) can be freely used under Attribution-ShareAlike license, unless stated otherwise. Cite this article:
Minister (Christianity) Facts for Kids. Kiddle Encyclopedia.