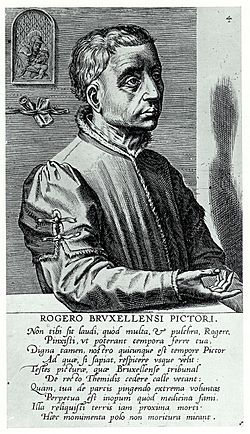 Rogier van der Weyden or Roger de la Pasture (1399 or 1400 – 18 June 1464) was an early Flemish painter. His surviving works are mainly religious triptychs, altarpieces and commissioned single and diptych portraits. He was very successful and internationally famous in his lifetime. His paintings went to Italy and Spain. By the end of the 15th century, he had become more popular than Jan van Eyck. His fame lasted only until the 17th century.

Due to the loss of archives in 1695 and again in 1940, there are few certain facts of van der Weyden's life. Rogelet de le Pasture (Roger of the Pasture) was born in Tournai in 1399 or 1400. His parents were Henri de le Pasture and Agnes de Watrélos. He married around 1426, to Elisabeth Goffaert. He was made town painter of Brussels in 1436. He changed his name from the French to the Dutch format, becoming 'van der Weyden'.

All content from Kiddle encyclopedia articles (including the article images and facts) can be freely used under Attribution-ShareAlike license, unless stated otherwise. Cite this article:
Rogier van der Weyden Facts for Kids. Kiddle Encyclopedia.