A triptych is a series of three separate paintings that together form a story. The word comes from the Greek adjective triptukhon (three-fold), from tri, (three) and ptysso, (to fold) or ptyx, (fold) The paintings are usually joined together, with hinges, so that they can be folded shut or displayed open. The middle painting is usually larger, although they can be of equal size.

A triptych is usually an art work, but the word can be used for anything in three parts which join together to make a single item.

The English painter William Etty painted a 28 ft (8.5 m) wide and 9 ft 9 in (3 m) high triptych of the life of Saint Joan of Arc. Etty sold the painting to an team of an engraver and dealer who went bankrupt in 1852. The paintings were separated and sold by 1893. The first panel which showed Joan of Arc finding the sword in the church of St. Catherine de Fierbois ended up in the collection of Llantarnam Abbey, Cwmbran, South Wales, U.K.. The Second panel is in the collection of the Musée des Beaux-Arts d'Orléans. The third panel has since been lost. 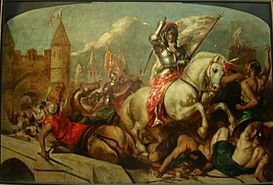 Center panel Joan of Arc makes a sortie from the gates of Orleans, and scatters the enemies of France, William Etty (1843). 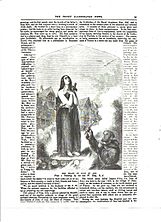 "Joan of Arc, after rendering the most signal services to her Prince and people, is suffered to die a martyr in their cause" 1849 engraving of the third panel from "The Penny Illustrated News" December 1, 1849 Vol 1, Issue 6 .p.45"

All content from Kiddle encyclopedia articles (including the article images and facts) can be freely used under Attribution-ShareAlike license, unless stated otherwise. Cite this article:
Triptych Facts for Kids. Kiddle Encyclopedia.