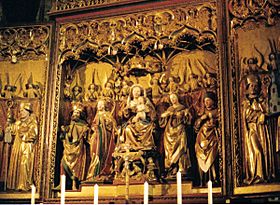 A carved and painted altarpiece from Chur Cathedral in Switzerland dating from the Late Middle Ages.

An altarpiece is a work of art that has been made to go above the altar in a Christian church. An altarpiece can be a painting, or it can be carved from wood or stone. Some altarpieces have both painting and sculpture.

What is an altarpiece for?

A beautiful altarpiece is a way of making a person who goes into a church feel interested, so they walk forward, closer to the altar. This puts them in a good position to see the church service, hear the prayers and readings, and listen to what the priest says.

If there is no service in the church at that time, the altarpiece gives a person something interesting to look at and think about. It helps them to think about Jesus or a particular saint whose story might be told in the pictures. Looking at an altarpiece can encourage a person to pray. 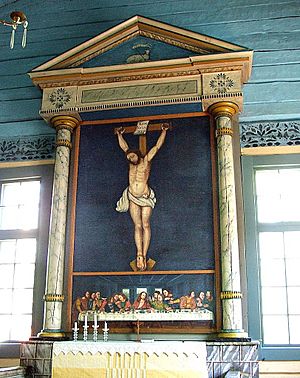 This sad image of the Crucified Christ is in a small church in Northern Ostrobothnia. It was painted by Carl Christoffer Stadig 1847. Beneath the main picture he has shown the Last Supper

What do altarpieces show?

There are three most common subjects, The Virgin Mary and Christ Child, Jesus crucified and Christ in Glory. These are three very important parts of Christian belief.

The other figures are usually saints. They might be shown standing around a throne where the Virgin Mary sits with Baby Jesus on her knee. Or they might be painted on separate pieces that are joined to the middle part of the altarpiece. These saints do not have to be people who were alive at the same time as Mary. They are more often the patron saint of the church or the favourites saints of the person who paid for the altarpiece.

Smaller rectangular parts of the altarpiece often have stories painted in them. They may be stories from the Bible telling the life of Jesus, or they might tell the life of a saint.

How big are altarpieces?

An altarpiece can be as small as a tiny painting put on the wall above a table in someone's home. Or it can be so big that it fills the wall of a huge cathedral. The word is usually used for artworks which are quite big. A small painting may be called a Holy Picture or an Icon. 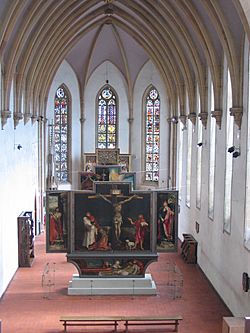 The chapel of Unterlinden Museum with The Isenheim Altarpiece.

All content from Kiddle encyclopedia articles (including the article images and facts) can be freely used under Attribution-ShareAlike license, unless stated otherwise. Cite this article:
Altarpiece Facts for Kids. Kiddle Encyclopedia.