Toledo is a city in Spain with a population of 85,000. It is a historical city with a lot of monuments. The city was important from the Roman period to the 18th century. It is the capital of the autonomous community of Castile-La Mancha and the Toledo province. Many famous people and artists were born or lived in this city, including Garcilaso de la Vega, Alfonso X and El Greco. A city in Ohio was named after this. 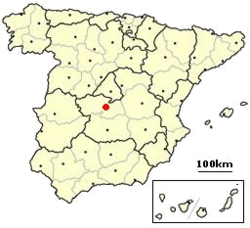 Map of Spain with Toledo shown in red

All content from Kiddle encyclopedia articles (including the article images and facts) can be freely used under Attribution-ShareAlike license, unless stated otherwise. Cite this article:
Toledo, Spain Facts for Kids. Kiddle Encyclopedia.