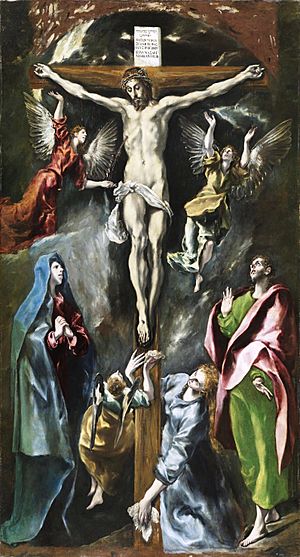 El Greco ("The Greek", 1541 – 7 April 1614) was a painter, sculptor, and architect of the Spanish Renaissance. He usually signed his paintings in Greek letters with his full name, Doménicos Theotokópoulos (Greek: Δομήνικος Θεοτοκόπουλος).

El Greco was born in Crete, which was the center of Post-Byzantine art at that time. He trained and became a master of that kind of art before travelling at 26 to Venice, as other Greek artists had done. In 1570, he moved to Rome and opened a workshop and made a series of works. While he was in Italy, El Greco added elements of Mannerism and of the Venetian Renaissance to his style. In 1577, at the age of 36, he moved to Toledo, Spain, where he lived and worked until his death in 1614. In Toledo, El Greco painted his best-known paintings.

El Greco's dramatic and expressionist style puzzled other painters at the time, but came to be appreciated in the 20th century. El Greco is considered to have influenced both the Expressionist and Cubist styles. His personality and works inspired poets and writers like Rainer Maria Rilke and Nikos Kazantzakis. Many modern scholars think that El Greco belongs to no conventional school. He is best known for long figures and often fantastic or dramatic coloring, combining Byzantine traditions with Western painting traditions. His paintings generally have very bright parts contrasting with very dark parts.

All content from Kiddle encyclopedia articles (including the article images and facts) can be freely used under Attribution-ShareAlike license, unless stated otherwise. Cite this article:
El Greco Facts for Kids. Kiddle Encyclopedia.