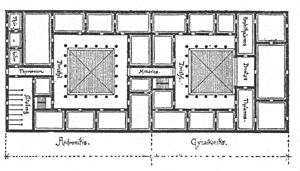 A Greek house plan, as desctibed by Vitruvius

Vitruvius (probably Marcus Vitruvius Pollio) was an Ancient Roman architect and engineer who lived in the 1st century BC. Neither his name, Marcus, nor his cognomen Pollio are certain. His main work is called De architectura (About architecture). There are ten books in it. He was probably born between 80 and 70 BC in Campania, and died after 15 BC.

All content from Kiddle encyclopedia articles (including the article images and facts) can be freely used under Attribution-ShareAlike license, unless stated otherwise. Cite this article:
Vitruvius Facts for Kids. Kiddle Encyclopedia.