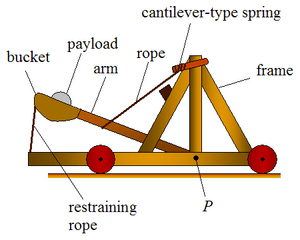 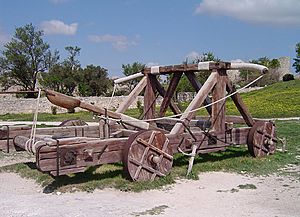 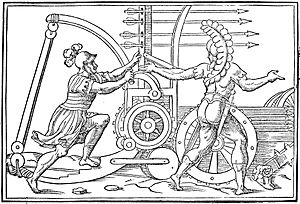 A catapult is a type of machine used as a weapon to throw rocks or other things such as hot tar, that would cause damage to something else. Often, catapults were set on higher ground or on castle towers to let them shoot farther. They shot rocks to break castle walls, or pitch or hot tar to set the target on fire.

Catapults use weights and levers to send the rocks or other things into the air. They do not throw as far as modern weapons do, and are not useful in modern warfare. Catapults were common in the past, especially the Middle Ages.

Nowadays catapults are used to study old weapons, and as experiments (for example in physics or engineering classes). Some old ones are kept in museums. 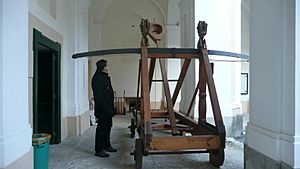 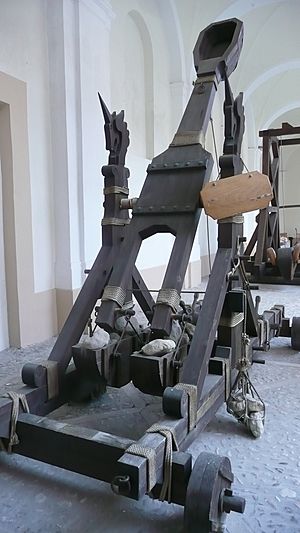 Castles and fortified walled cities were common during this period – and catapults were used as a key siege weapon against them. As well as attempting to breach the walls, incendiary missiles could be thrown inside—or early biological warfare attempted with diseased carcasses or putrid garbage catapulted over the walls.

Defensive techniques in the Middle Ages progressed to a point that rendered catapults ineffective for the most part. The Viking siege of Paris (885–6 A.D.) “saw the employment by both sides of virtually every instrument of siege craft known to the classical world, including a variety of catapults,” to little effect, resulting in failure.

The most widely used catapults throughout the Middle Ages were as follows: 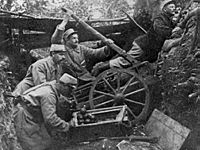 The last large scale military use of catapults was during the trench warfare of World War I. During the early stages of the war, catapults were used to throw hand grenades across no man's land into enemy trenches. They were eventually replaced by small mortars.

In the 1840s the invention of vulcanized rubber allowed the making of small hand-held catapults, either improvised from Y-shaped sticks or manufactured for sale; both were popular with children and teenagers. These devices were also known as slingshots in the USA.

Special variants called aircraft catapults are used to launch planes from land bases and sea carriers when the takeoff runway is too short for a powered takeoff or simply impractical to extend. Ships also use them to launch torpedoes and deploy bombs against submarines. Small catapults, referred to as "traps", are still widely used to launch clay targets into the air in the sport of clay pigeon shooting.

Until recently, catapults were used by thrill-seekers to experience being catapulted through the air. The practice has been discontinued due to fatalities, when the participants failed to land onto the safety net.

Pumpkin chunking is another widely popularized use, in which people compete to see who can launch a pumpkin the farthest by mechanical means (although the world record is held by a pneumatic air cannon). 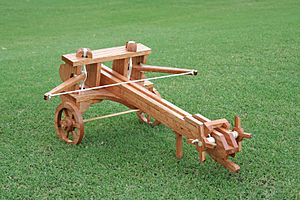 A commercial model of a Greek and Roman Ballista

In the US, catapults of all types and sizes are being built for school science and history fairs, competitions or as a hobby.

These kits can be purchased from Renaissance Fairs, or from several online stores.

All content from Kiddle encyclopedia articles (including the article images and facts) can be freely used under Attribution-ShareAlike license, unless stated otherwise. Cite this article:
Catapult Facts for Kids. Kiddle Encyclopedia.