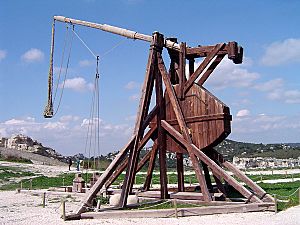 A Trebuchet was a device used in wars and sieges in the Middle Ages. It could be used to throw stones at ramparts, trying to break them down. It could also be used to throw things over the walls of a city like animal corpses. Trebuchets were more accurate than other medieval catapults.

The trebuchet works in a simple way. The basket of the trebuchet is filled with heavy rocks. This acts as a counterweight for the other end, which is usually filled with one large rock. Several men arm the trebuchet by raising the counterweight up and the firing arm down. At this point the arm is released, the heavy basket swings down and the arm swings up, launching the rock far and fast. The sling adds an additional 10-15 feet of arm length and gives the projectile a whip like speed then releases. The sling gives the projectile most of its speed.

All content from Kiddle encyclopedia articles (including the article images and facts) can be freely used under Attribution-ShareAlike license, unless stated otherwise. Cite this article:
Trebuchet Facts for Kids. Kiddle Encyclopedia.