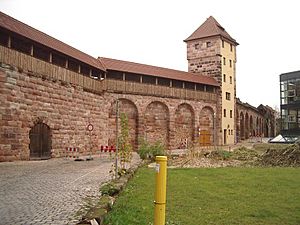 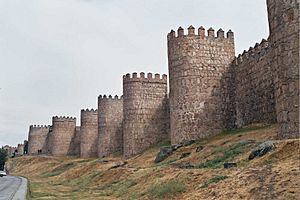 A defensive wall is a fortification used to defend a city from potential aggressors. In ancient to modern times, they were used to enclose settlements. Generally, these are referred to as city walls or town walls, although there were also walls, such as the Great Wall of China, Hadrian's Wall, and the metaphorical Atlantic Wall, which extended far beyond the borders of a city and were used to enclose regions or mark territorial boundaries. Beyond their defensive value many walls also had important symbolic functions — representing the status and independence of the communities they embraced.

All content from Kiddle encyclopedia articles (including the article images and facts) can be freely used under Attribution-ShareAlike license, unless stated otherwise. Cite this article:
Defensive wall Facts for Kids. Kiddle Encyclopedia.